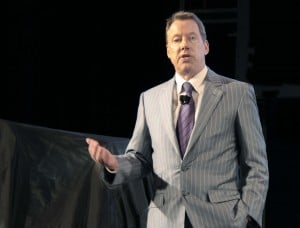 There could be a truce in the ongoing battle between GOP presidential candidate Donald Trump and the Ford Motor Co.

The controversial Republican has generated headlines for months by attacking Ford’s plans to move small car production out of the U.S., leading the automaker to fire back in a series of tweets during the recent presidential debate.

The company’s chairman and great-grandson of Henry Ford subsequently met with Trump to discuss the company’s plans and what he described as the “infuriating” attacks on the automaker.

“I’ve had a very good meeting with him,” Ford Chairman Bill Ford Jr. said during a meeting at the Economic Club of Washington on Wednesday. “He’s a very good listener and he knows the facts.”

Trump began his attacks on Ford Motor Co. earlier this year when the company announced it would end production of the Ford Focus and the C-Max at the Wayne Assembly Plant in the Detroit suburbs, moving production to a new plant in Mexico. Despite Ford’s promise to put new products into the plant, Trump accused it of gutting American jobs.

The candidate ramped up the attacks last month when Ford CEO Mark Fields revealed that all small car production would move out of the U.S., even though he repeated a pledge to replace those slow-selling models with new products.

“Our jobs are fleeing the country. They are going to Mexico,” Trump said in response to the very first question during the initial presidential debate two weeks ago. “So, Ford is leaving — thousands of jobs. Leaving Michigan, leaving Ohio. They are all leaving.”

The GOP nominee also warned that, as president, he would levy hefty new tariffs on Ford imports – even though government observers said that would require action by Congress and raise legal questions, especially if the second-largest U.S. automaker were the only manufacturer targeted.

Ford officials have acknowledged they will invest $1.6 billion in the new Mexican plant which will eventually employ 2,800. But the carmaker has also pledged to create almost three times as many jobs in the U.S. under the four-year contract it signed with the United Auto Workers Union last year. Ford has already invested $12 billion in American operations since the industry hit bottom in 2010, hiring 26,000 American workers.

During the debate, Ford representatives sent a series of tweets countering Trump’s claims.

The candidate has scored some points with his attacks, especially in some Rust Belt regions, such as Ohio, according to pollsters, but he has also been hurt in some groups where he has been seen as hurting an American manufacturer.

Ford Jr. said he had a “great meeting” with Trump, adding that the candidate asked some “thoughtful” questions. But whether that will end the attacks is another matter.

“The campaign trail is a different animal than anything I’m ever familiar with, so whatever he’s saying he’s going to say, I suppose,” the executive later told reporters. “But the facts, in my mind, speak for themselves.”

The Ford chairman suggested that, if anything, his company should be held up as an example of American success, rather than taking to task.

“I would like to think Ford is everything that should be celebrated about what’s right with the country,” he said. “We didn’t go bankrupt, we paid back our loans, we did it the old-fashioned way. We pulled ourselves up by our bootstraps.”