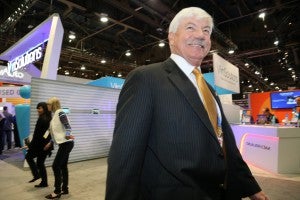 NADA Chairman Jeff Carlson told the Automotive Press Association in Detroit that federal regulation amounts to a $600 tax on a new car.

Federal regulation of everything from financing and fuel-economy to the handling of recalls amount to the equivalent of a tax on consumers, Jeff Carlson, chairman of the National Automobile Dealers Association, said during an appearance in Detroit.

“Washington doesn’t always understand the unintended consequences of their actions,” Carlson said during a meeting of the Automotive Press Association in Detroit.

Regulations surrounding recalls can lower the value of trade-in by hundreds of dealers because recalled vehicles cannot be resold by dealers. Dealers have to wait until the vehicle is repaired to sell, but in the meantime the value of car with a recall notice attached to its drops by hundreds of dollars.

Fuel-economy regulations also add substantial cost to new vehicle at a time when fewer consumers reported that are able to afford a new vehicle, Carlson said citing data compiled by Cox Automotive in which 57% of the respondents to a survey could not afford a new car.

The Cox data also showed that the price of new cars has increased by less than the rate of inflation but the median income of American households also has declined during the past two decades, making the purchase of new vehicle more difficult.

Carlson also defended the franchise law system, which protects dealers from direct competition by manufacturers. The State of Michigan, which requires carmakers to operate through franchised dealers, effectively prohibits Tesla from selling cars directly to customers in Detroit or Grand Rapids.

Carlson said Michigan’s position is absolutely correct. The fact is the “intra-brand” competition fostered by the dealer system saves consumers on average $700 per transaction. If manufacturers could sell directly to consumers, retail prices would go higher, Carlson said, and the savings would disappear.

Franchised dealers are flexible and have adapted to the changes in the retail environment. Dealers stock a large number of cars across the country and can deliver the correct vehicle to a customer’s doorstep.

“I can out Amazon Amazon,” he said. “I deliver cars all the time.”