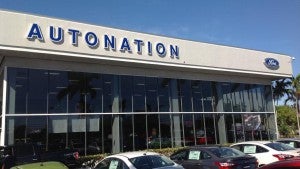 AutoNation plans to invest $500 million in a brand expansion that will see it challenge used car leader CarMax.

It may already be the nation’s largest new car dealer chain, but Florida-based AutoNation is setting out on a major brand expansion that will see it challenge used car specialist CarMax, start selling its own line of automotive parts and accessories and push further into online car shopping.

The project is expected to cost AutoNation about $500 million and take several years to put in place. But it could firm up the publicly traded dealer network’s grip at a time when many industry experts forecast dramatic changes to come in the automotive world. Whether the project is enough remains to be seen, as some experts believe car sales could decline during the coming decade in favor of new car- and ride-sharing alternatives, such as Car2Go and Uber.

AutoNation was at the forefront of an earlier transition, as thousands of traditional ma-and-pa dealerships were taken over by mega-chains. “Now we’re ready to see how we can extend this brand we created to new business opportunities,” said AutoNation CEO Mike Jackson.

The push into used cars is the most significant move for the near-term. By next year, AutoNation expects to have five stores open around the country, with another 20 in development. Longer-term, there could be as many as 100, on top of the company’s current portfolio of 270 new vehicle dealerships.

This would position AutoNation as a well-funded challenger to the current king of used car retailing, Richmond, Virginia-based CarMax. Even before today’s announcement, AutoNation was trying to shake up that segment, having launched one-price policies at a half dozen existing dealerships.

AutoNation's expansion plans have a target to overcome: CarMax.

Going forward, the company will put an emphasis on so-called Certified Pre-Owned, or CPO vehicles. There are normally off-lease models that have undergone extensive inspection and, where needed, repairs, something that generally translates into a higher price tag, but buyers also get like-new warranties.

Notably, in the last year AutoNation broke with much of the automotive retail industry by announcing it will not sell new or used vehicles subject to recall until such defects have been repaired.

Under Jackson, a former CEO of Mercedes-Benz USA, AutoNation will also extend its reach into the lucrative collision repair and aftermarket businesses with its own line of maintenance and repair parts, as well as vehicle accessories. According to the Specialty Equipment Manufacturers Association, the aftermarket business alone generates almost $40 billion in sales each year.

(Click Here for details about how auto dealers keep new car prices down.)

There are plenty of changes coming to the automotive retail business – and plenty of uncertainties. Lyft co-CEO John Zimmer this past month blogged his expectations that individual car ownership will disappear entirely by 2025. While that is generally seen as overly ambitious, according to a wide range of recent studies, a growing number of American will be relying on car-sharing and ride-sharing services over the next decade.

It is unclear what that might mean for automotive retailers, though it is clearly encouraging the seatch for new revenue streams.

Meanwhile, the other big transition is the move to online shopping. Because of various state franchise rules, manufacturers and dealers – as well as high-tech start-ups such as TrueCar – have found it difficult to move to a full, online purchase process. But AutoNation hopes to come close in the near future.

“AutoNation USA will utilize AutoNation Express, the company’s digital platform, which allows customers to dramatically reduce their transaction time by offering a seamless end-to-end experience where they can search online for inventory, select and reserve a vehicle, value their trade, see payment options, and apply for financing,” the Fort Lauderdale-based firm said in a news release outlining the latest moves.

While not quite the automotive equivalent of Amazon, AutoNation Express could come as close as any retailer has so far to letting car shoppers go from start to finish without setting foot in a showroom.