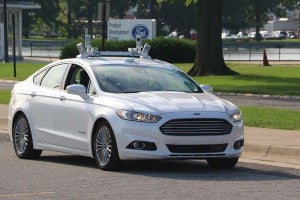 Ford's autonomous Fusions are on the roads near the company's product development center near Detroit.

On the sprawling Ford Motor Co. technical center in Dearborn, Michigan, the stuff of science fiction is quickly becoming an everyday reality – something TheDetroitBureau.com got the chance to experience firsthand this week with a drive in the maker’s latest autonomous vehicle prototypes.

The line of bright white Fusion sedans parked just outside the maker’s Product Development Center headquarters might initially go unnoticed, were it not for what, at first glance, looks like four whirling tin cans mounted to the roof of each vehicle. A closer inspection reveals them to be LIDAR devices, a special form of laser able to see the world around the vehicle in detailed 3D. Less obvious are the cameras and radar sensors also mounted on the vehicles.

The reason becomes obvious as software programmer Jakob Hoellenbauer slips into the driver’s seat, starts the sedan and hits a button on the steering wheel. Then, as the Fusion starts to pull away, he drops his arms to his side and joins in on the conversation. If this weren’t one of Ford’s latest autonomous vehicle prototypes, the discussion would likely get tense in a hurry.

The midsize sedan confidently begins to roll out for a 10-minute drive around the technical center along a route that will take us down busy Village Road before turning off onto side streets and, eventually, back to where we’d started. Along the way, we will have to negotiate traffic, stop signs and red lights, as well as several pedestrian crosswalks. 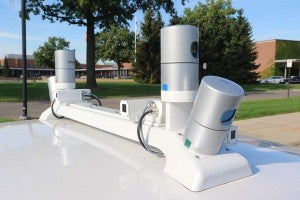 The LIDAR sensors atop the autonomous Ford Fusion will be replaced with smaller, less obtrusive models later this year.

It’s the sort of route that a human driver would readily take in stride, but programming a vehicle to maneuver such a route all on its own is a complex task requiring tens of millions of lines of software code. Even then, it isn’t easy.

(Ford will offer driverless tech by 2025. For more, Click Here.)

Google has already experienced more than a dozen collisions with its own autonomous vehicle prototypes – though it was blamed for only one – and there are two federal investigations underway involving the semi-autonomous Autopilot system used by Tesla that has been blamed for a fatal Florida crash on May 9.

One challenge is getting all those sensors to work nicely together. Another is writing software code capable of navigating all the situations human drivers deal with every day without breaking a sweat – as well as the occasional emergency.

“We’re being as conservative as possible,” explains Schuyler Cohen, a supervisor on the Ford autonomous vehicle program, who is riding shotgun this bright, warm morning. That means obeying every law to an almost painful degree.

The sign says 25 mph, that’s as fast as the Fusion prototype will go, even if everyone else does 30 and there’s a line of cars stacking up behind it. The lights are blinking at the crosswalk, the Fusion will wait until they stop, even if there’s no pedestrians to be seen. 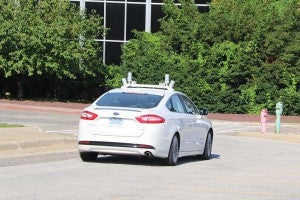 Ford's autonomous Fusions obey all traffic laws ... to the letter regardless of circumstances.

It’s a logical approach when you’re in the development phase of technology that could be quite dangerous if not properly programmed.

According to Cohen, Ford’s fleet of Fusion prototypes are routinely running on public roads in Michigan, Nevada, California and other parts of the country. Backup operators like Hoellenbauer go along for the ride and, if necessary, take control when the car runs into a problem. The automaker may then try to recreate unexpected situations on its own test track or at the new MCity autonomous vehicle facility the University of Michigan has set up near its campus in Ann Arbor.

The improvements are coming fast, says Ford’s global product development director Raj Nair. A new generation of LIDAR “pucks” will be put into operation before year-end. They’ll be smaller, cheaper and not need to spin like the current models. They’ll also be able to map the road around the vehicle out to distances of more than 600 feet, and to resolutions precise enough to spot a single finger – or a small animal or debris on the road.

Updates to software will allow the vehicle to drive more like a human, even if that means a little over the speed limit to maintain the pace of traffic. But just like a camera, these sensors are designed never to blink – or be distracted by smartphone calls and texts, or screaming children in the back seat. 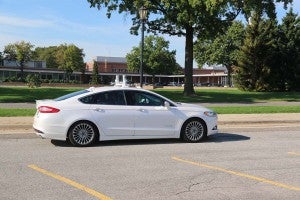 The autonomous Fusion uses a collection cameras, radar and LIDAR sensors to navigate its environment.

That’s why Mark Rosekind, the head of the National Highway Traffic Safety Administration, predicts that autonomous vehicles could eventually eliminate highway fatalities in the U.S. Other experts think that’s a stretch but the general consensus is that there will be a huge reduction in deaths and injuries, even while traffic congestion is reduced significantly.

For its part, Ford plans to skip directly to driverless vehicles, eliminating entirely the need to have backup drivers ready to take control in an emergency. It believes it can avoid those problems – and Nair contends that humans simply couldn’t react quickly enough, anyway.

Ford plans to put its first driverless model – which may eliminate traditional steering wheel and pedals – by 2021. It will target ride-sharing and delivery fleets first. Sales to retail customers could begin by 2025, CEO Mark Fields revealed this week.

Meanwhile, the maker plans to start fielding more and more prototypes to give developers like Cohen and Hoellenbauer more opportunities to tweak both hardware and software. By 2018, the maker will begin using the technology for the shuttles it runs around its sprawling Dearborn campus.

One of the biggest challenges, says Nair, will be taking autonomous technology and producing it in high volume. But there are plenty of others, not the least convincing regulators to approve hands-free and fully driverless vehicles to approve the widespread use of this technology on public roads. But new federal guidelines are expected in the coming months and Michigan lawmakers are leaning in favor of a proposed measure that would allow fully driverless vehicle testing on state highways.

There are still plenty of skeptics, but most industry observers anticipate that autonomous vehicles, in one form or another, could account for as much as a quarter of all new vehicle sales by the end of the next decade.