U.S. only getting Fortwo ED, however. 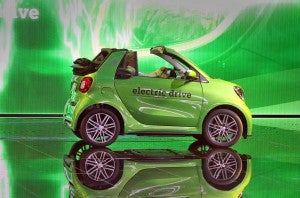 Range anxiety remains one of the biggest concerns for consumers considering a battery-electric vehicle but it’s less of a concern for those who might only need their vehicles for short runs in dense urban settings. And that could play out well for the little Smart brand.

Daimler AG’s city car subsidiary plugged into the Paris Motor Show with a trio of next-generation battery-electric vehicles, one for each of Smart’s models. The preview was part of a broader series of announcement about electrification that included the launch of the new Mercedes-EQ brand-within-a-brand.

(Live from Paris! Click Here for complete coverage of the 2016 Mondial de l’Automobile.) 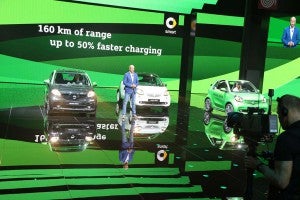 Europeans will have three different Electric Drive options to choose from.

When it was first launched, two decades ago, Smart was targeted at youthful urban dwellers who were looking for vehicles that were affordable, efficient and, arguably most important of all, easy to park. The Fortwo certainly nails it when it comes to maneuverability and parking, being small enough to slip into a spot on the typical city street nose-in, while turning a complete circle in less than 23 feet.

The fifth-generation Fortwo was launched in gasoline form last year, Smart hoping to resolve complaints about its rough-riding engine and balky transmission. The new gas powertrain has generated reasonably positive reviews, but some Smart insiders are betting that a growing number of buyers will decide to go electric once the new ED models are available.

This is no Tesla Model 3 fighter. The driveline is as downsized as the Smart Fortwo itself. Its three-phase synchronous motor, powered by a 17.6 kilowatt-hour lithium-ion battery, spins out 80 horsepower and 118 pound-feet of torque. Surprisingly, the numbers that Smart quotes indicate the 2017 makeover will actually be slower than the previous version of the ED, taking 11.4 seconds for the coupe to hit 60, and 11.7 seconds for the cabriolet. Top speed is governed at 81 mph. 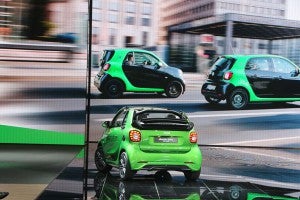 This is the fourth generation of Smart cars to offer battery-power options.

Range gets a bump, however, Smart projecting 99 miles before you absolutely must plug in again with the hardtop, 96 with the convertible. (Those are based on the European cycle, however, and the numbers almost certainly will dip when the EPA finishes its own testing.)

One big improvement comes to the fore when it’s time to plug the new ED models in. Charging times have been cut by half, Zetsche noted during the news conference, from 5.5 to 2.5 hours using a 240-volt charger. On a standard U.S. household 110V outlet, however, it will take you a full 22 hours to top the battery off.

A driver will have the option to switch to ECO mode to maximize range, albeit at the expense of performance.

The Smart Fortwo ED will be paired with a smartphone app, meanwhile, that will allow an owner to remotely access information like the battery’s state of charge, while also controlling such things as when to begin charging, and setting up cabin pre-conditioning. That can be used to warm the cabin in winter or cool it in summer while the ED is still hooked up to a charger, reducing the initial battery drain.

Visually, beyond the badges, you might not know this is a battery version of the latest Fortwo – unless you opt for the Electric Drive design package, with its eye-popping green paint accents. Inside, there’s a new gauge to monitor the electric powertrain.

While no U.S. pricing has been announced, the Smart Fortwo Electric Drive will start at 21,940 euros, or $24,543, in Germany. That’s likely close to what it will be State-side.

The Smart ED line-up is just one part of the broader electrification campaign Daimler announced in Paris. The German maker revealed the Generation EQ concept car which should translate into a production model before 2020. It will anchor a broader array of battery-electric vehicles that will be sold under the new Mercedes-EQ brand badge.