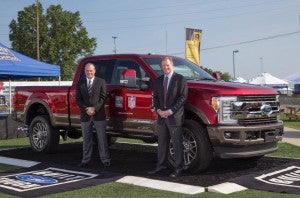 The tug of war between Ford and General Motors’ trucks moved in the Blue Oval’s direction as it secured the title as the “Official Truck” of the National Football League, taking the job from the GMC Sierra.

GMC ended its partnership with the NFL in 2014 and this move isn’t entirely surprising as the Detroit Lions are owned by the family of Ford Motor Co. Executive Chairman Bill Ford.

“America’s truck leader is teaming up with organizers of the nation’s favorite sport to put the spotlight on fans and players who show toughness, smarts and determination on and off the field, and who deserve to be recognized for that,” Ford top U.S. marketing executive Mark LaNeve said in a statement.

“Both brands – each a leader in its category and known for toughness, capability, excellence and innovation – are coming together to give fans exclusive access to events and games, and to highlight players in a new way.”

There was no official release of how much Ford will pay to be the “official” truck, but Hyundai took over from GM as the official car brand two years ago at a reported $50 million annually, which was double what GM was paying, according to reports. The move also adds to the ongoing competition between the two automakers.

The two sides have been taking shots at the other for decades, but in the last few years it’s ratcheted up a bit. Most recently, GM took Ford to task for using aluminum in its truck bed. In a commercial, several heavy items are dropped into the bed of a Ford F-150 and a Chevy Silverado.

The F-150 comes out much worse for wear in the spots as a group of “not actors” survey the damage afterwards and make unflattering comments about the Ford.

Additionally, Ford has enlisted former NFL offensive lineman, NFL Network and NFL.com analyst Shaun O’Hara to pick and “Offensive Line of the Week” sponsored by Ford. O’Hara will use statistical analysis, positional expertise and knowledge of assignments to determine the wining line based on their performance in the previous week’s games.

At the end of the season, one line will be recognized as the “Built Ford Tough Offensive Line of the Year” at the annual NFL honors awards presentation.