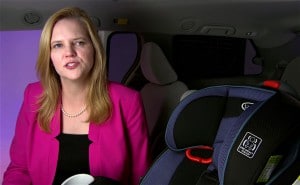 The Insurance Institute for Highway Safety released its ratings for top vehicles for child safety restraints and three received the top rating.

If you’re looking for the safest car in which to transport your newborn home from the hospital, a new study from the Insurance Institute for Highway Safety suggests you might want to borrow your parents’ car.

The group recently completed its analysis of 170 current models, and most are good or acceptable. Three models — the Audi Q7, Lexus RX and Toyota Prius — earn the top rating of good+, a distinction that no vehicle achieved last year.

Of course, two of the three aren’t usually owned by parents; however, the overall improvement is a good sign that the industry is working to make vehicles safer overall. The key to improved safety of the seats is proper anchors and tethers.

IIHS calls that LATCH: Lower Anchors and Tethers for Children. The idea is to make a child safety seat easier to install. Putting the restraint in correctly is critical to safety because often parents install the seats improperly.

Child restraints installed with LATCH are more likely to be put in correctly than restraints installed using the vehicle safety belt, IIHS research has shown. Even with LATCH, installation errors are common. The Institute’s ratings are based on key ease-of-use criteria that have been shown to minimize mistakes.

“Frustrating child seat installations have become a familiar rite of parenthood,” says Jessica Jermakian, an IIHS senior research engineer. “Unfortunately, these frustrations lead to mistakes that can have real consequences in the event of a crash. We’re pleased to see automakers taking this issue seriously and making improvements in response to our ratings.”

Joining the aforementioned three as being better than average with a “Good” rating were: Audi 4 (2017); Audi A6; BMW 2- and 5-Series; Mercedes-Benz C-, E-, GL- and GLE-Class; and Volkswagen Passat.

In the IIHS ratings system, LATCH hardware is considered good if it meets the following criteria:

To earn a good rating, two LATCH positions in the second row must meet all five criteria, and a third tether anchor must meet both tether criteria.

(Click Here for details about how to find a good deals on outgoing models.)

The good+ rating is for vehicles that meet the criteria for a good rating and provide additional LATCH-equipped seating positions.

The good+ designation is intended to encourage manufacturers to give parents greater flexibility when seating children in a vehicle.

“We’re especially interested in making it possible for more parents to use LATCH in the second-row center position,” Jermakian says. “Parents are repeatedly told that is the safest place for children to ride, so we want them to have the option of an easy installation there.”

The second-row center is safest because it is far from the hard surfaces of the vehicle interior and from the striking vehicle in a side crash. However, a properly restrained child is very safe in any rear seating position.