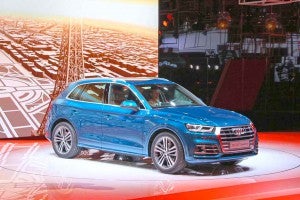 Audi is shifting production of the next-gen Q5 ute to its new plant in Mexico.

With a record number of new products in the pipeline, Audi had plenty to show off during its Paris Motor Show news conference Thursday, a trio of new offerings targeting a wide range of global product segments.

Already the most popular luxury crossover on the market, the Volkswagen subsidiary is hoping to build even more momentum with the launch of a completely new Q5 sport-utility vehicle. Also on hand, Audi rolled out the new S5 Sportback. The third global premier not only marked the launch of the new RS3 Sedan but the debut of the maker’s new Audi Sport sub-brand.

“These three new models symbolize what our brand stands for,” said Rupert Stadler, the Audi AG CEO. Actually, that’s not entirely true. Unlike its two major German rivals, Audi put much of the focus on performance during its news conference, something of a surprise considering how much it has emphasized battery-car and other green technologies in recent years.

(Live from Paris, Click Here for complete coverage of the 2016 Mondial de l’Automobile.)

From a sales standpoint, the all-new Audi Q5 is the big story from the Mondial de l’Automobile. The second-generation SUV has migrated to an entirely new architecture, known inside the Volkswagen Group as the MLB, which will be shared with a variety of other brands. Inside Audi itself, the platform was also used for the latest version of the A4. 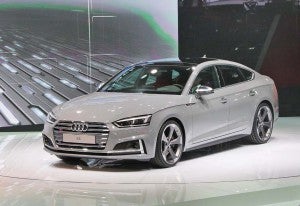 It features a longitudinally mounted engine layout, rather than the transverse layout of the smaller MQB platform used in such models as the Audi A3 and the Volkswagen Golf.

As with other recent models, Audi engineers put a premium on lightweighting the new Q5 and the next-gen ute shed about 200 pounds compared with the previous model.

A variety of other steps have been taken to improve the Audi Q5’s fuel efficiency – and, for the European market, reduce CO2 emissions. At launch, the ute will feature the Quattro all-wheel-drive system, but the rear wheels will be disconnected from the driveline in ideal conditions, sending power entirely to the front axle.

A total of five different engines will be offered in different markets, from a 148-horsepower 2.0-liter diesel up to 249 hp gas engine. Look for an SQ5 to follow, driving up the performance quotient, with a 450-hp RS to push the limits even further.

(Lexus downsizes with UX sport-ute concept. Click Here to check it out.)

The Paris preview, notably, came a day before another significant milestone for Audi. On Friday, the automaker will officially launch production at its all-new Mexican assembly plant, a facility that will become the sole source for the second-generation Q5. 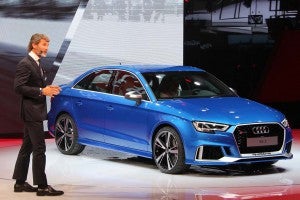 Like most new Audi models, the new Q5 will be filled with a variety of high-tech hard and software, including a more advanced version of the current multimedia infotainment system. There will also be a variety of new safety systems that fall just a wee bit short of crossing into autonomous driving territory.

While we’ll have to wait for the high-performance Q5 variants, Audi fans will soon be able to get their hands on the newest member of the A5 family, the S5 Sportback.

Like the new A5 that made its debut earlier in the month, the Sportback shares the same underpinnings as the A4 sedan – and the new Q5 ute. Audi designers have tweaked the S5 Sportback’s styling just enough to give it a more muscular appearance than the base A5. Meanwhile, engineers have managed to shave its weight by almost 200 pounds compared to the old model.

The Sportback shares the same 3.0-liter turbo-six found in the other S versions of the A4 and A5. It churns out 349 horsepower, enough to launch the car from 0 to 60 in just 4.6 seconds. 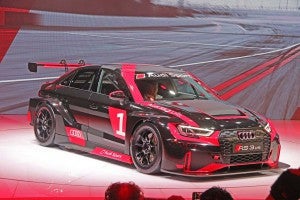 Audi will take the RS3 racing with the LMS model.

For real performance, however, potential buyers are likely to soon catch wind of the latest RS offering, the RS3, a 2.5-liter, 400-horsepower turbo-five tire-burner. Power is channeled through a seven-speed dual-clutch gearbox and delivered to all four wheels, with a variable torque system that can shift power to either of the axles.

The arrival of the RS3 will usher in a wave of new models carrying the Audi Sport designation. The VW subsidiary has created the new brand-within-a-brand to become a more direct competitor to the likes of BMW M and Mercedes-AMG. It will get “only our most prestigious models,” declared Stephan Winkelmann, the former Lamborghini CEO now running the Audi Sport brand.

Over the next 18 months, he continued, that will translate into eight new models, starting with the RS3.

Audi actually added a fourth new model to its Paris news conference, albeit one that only a handful of fans will ever get to drive. It plans to campaign the new RS3 LMS in a variety of racing series around the world.

(Infiniti drives into Paris with two updated models and a breakthrough engine. Click Here for more.)