CEO Musk insists production getting back on track.

Tesla CEO Musk with an image of the troublesome Model X which missed production targets.

Burdened by a slower-than-expected roll-out of its Model X sedan, with sales overall falling short, Tesla Motors delivered an unexpectedly deep loss for the second quarter of the year.

The automaker, which has been using its own accounting procedures, said it lost $293 million, or $2.09 a share, for the April to June quarter. Excluding special one-time items, the loss narrowed to $150 million, or $1.06 a share. But that was still well below Wall Street’s expectations, analysts predicting the maker would lose $0.65 a share.

The maker tried to put a positive spin on the weak performance by looking forward. “Production and demand are on track to support deliveries of approximately 50,000 Model S and Model X vehicles during the second half of 2016,” CEO Elon Musk and CFO Jason Wheeler said in a joint statement announcing the earnings.

Tesla last month revealed it delivered 14,370 vehicles during the second quarter, but that was 15% less than the 17,000 the battery carmaker had predicted as recently as May. The problem was primarily due to ramp-up issues with the newer Model X electric SUV which has been plagued by quality problems. There have also been issues with suppliers.

“Vehicle production efficiency is improving rapidly,” the maker said in Wednesday’s earnings release, predicting that “barring any further supply constraints,” the goal is to get to a “steady” production rate of 2,200 vehicles a week by the end of the third quarter, and 2,400 vehicles into the final three months of the year. That would put Tesla back on track for meeting its original 2016 goal of producing between 80,000 and 90,000 vehicles.

But Tesla has a history of missing targets. The Model X, for example, was two years late to market and seriously troubled once it did arrive. So, analysts appear to be nervous about accepting the maker’s near-term optimism. 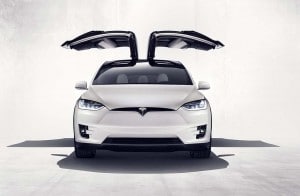 Tesla’s quarterly loss was tied, in part, to the slower-than-expected roll out of the new Model X.

For the second quarter, revenues came to $1.3 billion, with adjusted revenues at $1.6 billion. That was up 31% year-over-year, but still short of the $1.65 billion analysts had expected.

The good news is that the maker has enough cash on hand – about $3.2 billion – after generating $1.7 billion through a new stock offering that went off in May. It also has plenty of cash from the estimated 400,000 advance reservations received since it unveiled the upcoming Model 3 sedan on March 31. But those reservations are not guaranteed sales and potential customers can request their money back.

A sizable chunk of that cash will be needed to complete development of the Model 3, Tesla’s first mainstream entry. The sedan is expected to come in at around $35,000 for a 200-mile version, with longer-range battery options available.

Tesla CEO Musk has boasted of plans to get production up to around 500,000 vehicles annually by 2018, though skeptics remain over that aggressive ramp-up. The company has said it is adding new retail outlets every four days, both in the U.S. and abroad. But it is still locked out of a number of states, such as Michigan, because of its decision to only operate factory-owned showrooms.

Tesla will need even more money to meet the ambitious “Master Plan, Part Deux” that Musk revealed last month. It calls for adding another, smaller SUV, as well as a battery truck and a battery bus.

The CEO also has gotten his wish of a takeover of solar panel maker SolarCity, despite plenty of controversy. The deal was called a conflict of interest by critics because Musk is SolarCity’s chairman and a cousin serves as its CEO. But he countered that it would be a conflict of interest not to complete the $2.6 billion acquisition because it creates many synergies in the sustainable energy field.

Tesla hopes to increase revenues not only by boosting car sales but by ramping up production at the new Gigafactory battery plant it is setting up in Reno, Nevada. It will provide batteries for the Models S, X and 3, as well as the Powerwall backup electric system.

Analysts and investors have also become nervous over other challenges facing Tesla, notably a pair of federal probes looking into a fatal May 9th crash of a Model S operating in semi-autonomous Autopilot mode. Musk has declined calls to disable the technology while the probes are underway, but he has also said Tesla is working with its suppliers to improve the system.