Flagship G90 to be one of six new models in the works. 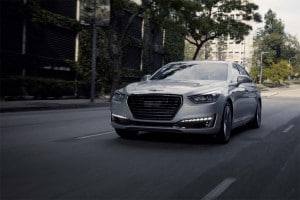 With the launch of the big G90 sedan, the all-new Genesis brand plans to take on some of the world’s toughest luxury competitors, products like the BMW 7-Series and Mercedes-Benz S-Class.

The luxury arm of Korea’s Hyundai Motor Co., Genesis is nothing if not ambitious, with a total of six products scheduled to fill its line-up over the next five years. Those range from a compact sports coupe to a large SUV and tackle some of the luxury markets best-known entries, including the classic BMW 3-Series.

The Genesis name has been around for almost a decade, making its original debut as the first luxury model from Hyundai itself. But after years of resisting plans to create a separate luxury division, Hyundai reversed course, last year announcing it would spin off Genesis and turn it into a brand of its own.

The timing was not entirely a surprise. Luxury sales have been growing faster than the overall automotive market, especially in places like the U.S. and China, and “We want to be a part of that growth,” something Hyundai could only do “with a whole brand,” explained Dave Zuchowski, the CEO of Hyundai Motor America. 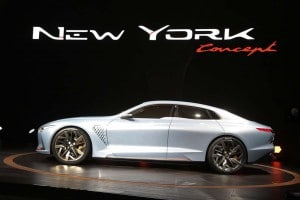 Genesis hinted at its design direction with this concept from the 2017 NY Auto Show.

The original Genesis sedan, with some modest tweaks, helped get things into gear. Newly renamed the G80, it recently went on sale as the first product from Genesis. Next up is the G90, a complete makeover of the bigger Hyundai Genesis. Journalists from across North America are getting a first chance to drive the full-size, S-Class competitor this week in Vancouver, Canada.

The Genesis G90 adopts a more distinctive look than the old Equus model, styling a key selling point in the luxury market. As would be expected, it is loaded with plenty of creature comfort features, including a 22-way driver’s seat, lots of leather and wood. There are the requisite high-tech touches, including an array of the latest safety technologies, like automatic emergency braking.

With the Genesis G90 not set to go on sale until September, pricing hasn’t been finalized. Company officials hinted it will come in higher than the old Hyundai Equus, but will be a “value” compared to key competitors, such as the Mercedes S-Class and BMW 7-Series, despite having a higher level of standard content.

“We know we can’t price comparably to BMW or Mercedes,” for a brand that hasn’t established its identity, acknowledged Zuchowski. On the other hand, “You don’t want to be a cheap date. You want to be a lot of bang for the buck.” 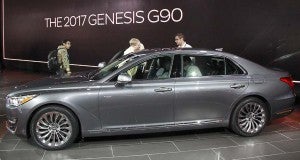 “We studied closely the Lexus playbook,” he said, referring to the strategy the Toyota spin-off used when it also cracked into the established luxury firmament in 1989. At the time, Lexus models were priced at about 60% of what European rivals were getting, slowly increasing as the Japanese marque became an accepted competitor.

Product will be only part of the Genesis approach, Raphael noted. The new marque will attempt to make life easier for its upscale buyers – folks, he noted, who may have plenty of money but too little time. Among the features it will offer, customers will be able to schedule service appointments and have a valet come pick up their cars at home or the office. A loaner will be left in its place until the vehicle is returned.

A variety of other concierge services have been announced, with others in the works.

While the new G90 will serve as the flagship of the Genesis brand, it won’t be the volume leader. The G80 will likely bring in significant higher numbers. In fact, the old Genesis sedan was close to matching the U.S. figures for the BMW 5-Series and Mercedes E-Class this year. Genesis is hoping to strike an even more resonant chord with the G70, which will serve as its answer to the BMW 3-Series, the powerhouse in the near-luxury segment. 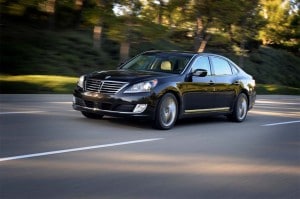 Hyundai first tested the waters of the premium luxury segment with the Equus sedan.

That said, the brand’s timing was a little off, Zuchowski acknowledged. It really could use an SUV, considering the surge in that segment of the market. But that won’t happen until after the debut of the G70 because of the need to develop an all-new platform. Ultimately, Genesis plans to have at least two utility vehicles, while also working up a “true” sports coupe to replace the old Genesis Coupe.

Even with six models, Hyundai’s new luxury brand is setting itself modest goals. It currently sells about 30,000 of its various luxury models and hopes to get that up to 90,000 by 2021, barely a third of what leaders like Mercedes, BMW and Lexus currently move in the U.S. market.

Still, Genesis officials contend that will be more than enough for parent Hyundai to turn a good profit. And dealers, as well. Initially, Hyundai has chosen a somewhat controversial approach for the Genesis launch. Instead of setting up entirely separate showrooms, as Lexus did, it will have so-called showrooms-within-the showroom at about 350 existing Hyundai dealerships.

The investment in a separate facility – which typically runs to several million dollars – can’t yet be justified, Zuchowski stressed, adding that “When we have all six products, it will justify dealers going off an starting all-new showrooms.”

While the original Genesis sedan and coupe models have some modest consumer awareness in the U.S. market, Genesis is facing a major challenge getting onto the radar screens for high-line consumers. It will begin the process this autumn as the new official automotive sponsor of the NFL. It also is planning a variety of other sport marketing deals and a splashy ad campaign to follow.

Genesis is only the sixth new luxury brand to debut in the U.S. since 1970 and, along with Tesla, only the second since the start of the new millennium. Whether it can make inroads in a market already saturated with well-established European and Japanese competitors remains to be seen, but it will help to have a patient parent with deep pockets.