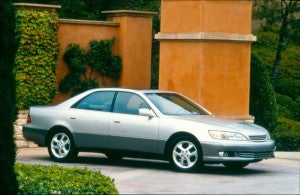 If you're behind the wheel of this car, you're more likely to get a ticket than anyone else.

It’s not news that Americans are piling up more miles behind the wheel than ever. Cheap gas and a strengthening economy are combining to lure people out on to the open road.

Of course, once a person slides into the driver’s seat, turns the key and stomps on the accelerator, then that driver is fair game for a dreaded experience: the speeding ticket. Some are more prone than others to being caught lead-footed.

In fact, Lexus ES 300 drivers are more likely than any other motorist to get a ticket, according to a new report from insurance.com. The ES 300 was produced between 1992 and 2003.

As an older model, it is possible that current drivers may have purchased a used vehicle at a great value, or that younger drivers could be operating a family sedan that was passed down to them.

In a previous study, conducted in 2014, the Subaru WRX ranked as the highest “ticket magnet,” but that make and model dropped to number 12 in the most recent data analysis.

“It’s the driver that gets tickets, not the car,” said Penny Gusner, consumer analyst for the website. “But it is interesting to see what vehicle makes and models attract drivers who are prone to traffic violations.”

The Lexus driver has plenty of company, as the drivers of the Nissan 350Z, Dodge Charger SE and SXT, Volkswagen Jetta GL and Chevrolet Monte Carlo rounded out the top five of those who received the most tickets.

The drivers, who were surveyed between February 2014 and February 2016, will be unhappy to discover that speeding tickets are the top reason for insurance rate increases or setting rates for new customers. Also, potential buyers of those vehicles should be aware that rates are already adjusted upward for anyone owning one of those vehicles.

“It’s notable that cars on most tickets list also appear to have an above-average number of insurance claims,” said Gusner.

Twenty-three percent of surveyed drivers at the top of insurance.com’s ticket list filed an insurance claim during the survey period, while only 19% of all other cars made insurance claims within that timeframe.

So, who are slow pokes? The drivers that enjoy built-in favorability because they – as a group – are less likely to speed, or get caught doing it. Buick Encore drivers are the least ticketed drivers. In fact, luxury car owners are less likely overall to get tickets.

The high-priced vehicle owners are likely to be older and more experienced and as a result, less likely to have a heavy right foot.

The rest of the top five for least ticketed includes: Lexus IS350, Acura ILX, Cadillac ATS and Chevrolet Express.