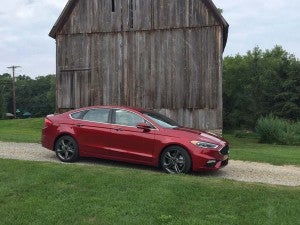 Ford took the wraps off the 2017 Fusion Sport revealing a snarling beast under the hood.

When Ford Motor Co. pulled the wraps off the 2013 Fusion sedan, it sent heads turning. It was as striking and game-changing a design as any the automaker had rolled out since the launch of the original Ford Taurus nearly three decades earlier.

The midsize model was handsome and distinctive in a segment largely known for look-alike styling. And it was reasonably well-equipped, as well, offering a range of high-tech gear as part of Ford’s strategy of “democratizing” advanced safety and infotainment systems. What it needed, however, was a little more muscle.

Now, the carmaker has addressed that shortfall. The 2017 Ford Fusion Sport packs a new 2.7-liter EcoBoost V-6 under its nicely sculpted hood. But instead of just upgrading the sedan’s powertrain, the new model also boasts major suspension enhancements as well as some well-conceived tweaks to both its interior and exterior styling.

While the Fusion Sport isn’t a Mustang, it’s the sort of car that would readily satisfy a pony car buyer who needs something with four doors. The compromises are minor, the added benefits significant.

At a time when many automakers have cut back on the powertrain options available to midsize buyers, Ford has gone in the opposite direction. There are now six different engine choices, including the base 2.5-liter naturally aspirated I-4, and four more turbocharged EcoBoost packages. 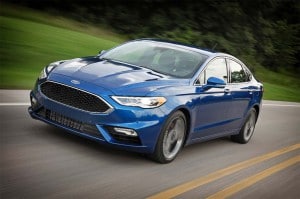 The 2.7-liter V-6 found in the ’17 Fusion Sport is a mainstay in Ford’s light truck line-up, something that should become apparent when you consider its numbers. It makes an impressive enough 325 horsepower, but then there’s the torque: a full 380 pound-feet that comes on fast and peaks out at just 3,500 RPMs.

To get a feel for what that means in the 3,982-pound Fusion Sport, we headed to Hell … Michigan, that is, a spookily quaint village an hour from Detroit that boasts some of the best roads in the region.

Straight line launches reveal not a tic of torque steer. But you’ll feel yourself quickly sinking into the leather and suede-finish seats unique to the Sport model. Ford isn’t offering 0 to 60 numbers, but preliminary estimates put it in the low to mid-5-second range.

You might think it’s even faster, thanks to the dramatic, almost V-8-like engine grunt, especially if you’ve set the mode control to Sport. Tap the little “S” button in the center of the rotary shifter and you modify a whole host of vehicle functions, including throttle response, transmission shift timing, steering feel and the digital instrument cluster display. You also get rev-matching shifts and quicker response from the standard-equipment paddle shifters. 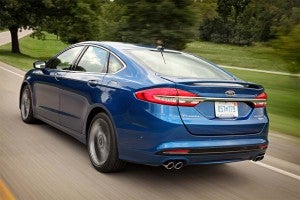 Tap the little “S” button in the center of the rotary shifter and you modify a whole host of vehicle performance functions.

The Ford engineers on hand for our drive paid homage to the magnetic ride control system found on many General Motors products. It uses a magnetically sensitive fluid to continuously adjust shock damping rates. Ford’s system doesn’t have to ride in the backseat, however. With unique software developed specifically for the Fusion Sport, it reads the road – and driver input – every 2 milliseconds, automatically adapting individual shocks, as needed.

That was immediately obvious as we blasted down the rough and winding tarmac cutting through Hell and the surrounding farm communities. Even at what we might call “extra-legal” speeds, the Sport sedan maintained a steady poise, weaving through S-turns and showing only the most modest body roll even on off-camber corners.

Another plus: the sedan features Ford new pothole protection system. It’s designed to detect when one of the tires is about to plunge into a pavement abyss. It effectively tightens up the shocks to prevent the wheel from fully extending. It’s less jarring and is less likely to mangle a tire or wheel. We in pothole-covered Michigan are especially appreciative of this new feature.

(Click Here for details about Ford extending the production run of the new GT.) 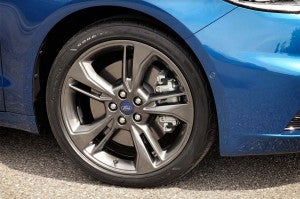 The new Fusion features a pothole protection system designed to detect when one of the tires is about to hit one and take action to limit the damage.

As for steering feel, you just might forget you’re driving a mainstream, midsize sedan. There’s a good on-center feel and while it’s not as quick as a European sport sedan, steering is responsive, precise and predictable.

Visually, the 2017 Ford Fusion Sport maintains the handsome lines of the base sedan, but it also gets a new quad exhaust, LED headlamps and foglights and unique 19-inch tires and wheels, the latter painted in a dark “tarnish.”

Inside, you’ll find a leather wrapped wheel, aluminum sport pedals, unique floormats, suede door insert and dark “earth grey” leather trimmed seats with suede inserts. The instrument cluster, as noted, features some modifications, including a tach that pops up when you shift to Sport and start pushing the powertrain.

While Ford engineers clearly want you to hear the engine growl under wide-open throttle, they’ve taken pains to reduce cabin noise under less aggressive driving. The front and side windows use noise-reducing laminated glass and there’s even an active noise-control system.

In keeping with industry trends, Ford has added a whole host of new, high-tech safety features to the Fusion Sport, including Auto High-Beams, Lane-Keeping Assist, Lane Departure Warning, Blind-Spot Detection and Pre-Collision Warning with Autonomous Emergency Braking and Pedestrian Detection. On the downside, you need to purchase the optional safety package to get all those advanced driver assistance features – though the backup camera is standard issue. 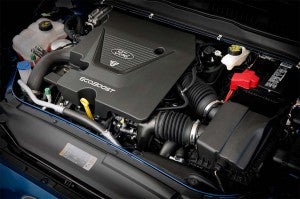 The new 2.7-liter V6 in the Fusion Sport doesn’t have an official 0-to-60 mph time, but estimates are in the low to mid 5-second range.

One other set of numbers worth noting: the EPA rates the sedan at 17 mpg City, 26 Highway and 20 Combined.

(Ford planning to launch first driverless car by 2021. Click Here for the story.)

Set to go on sale before the end of summer, the 2017 Ford Fusion Sport is a pleasant addition to an already pleasing sedan model line. It delivers the sort of added punch that turns the Fusion into a seriously fun daily driver and gives good reason for potential buyers to stay with a sport sedan rather than a sport-utility vehicle.