Maker tells franchisees it will compensate them for lost business. 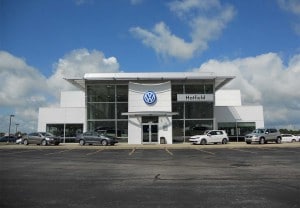 VW plans to compensate dealers like Hatfield Volkswagen, of Columbus, OH, for their losses.

Volkswagen appears ready to take another critical step towards resolving its diesel emissions scandal, this time by compensating dealers who have suffered a sharp drop in sales since the scandal was revealed last September.

While the maker hasn’t publicly commented on the plan, news reports indicate the basic details were outlined during a meeting with more than 150 franchised dealers in New Jersey in recent days. The maker intends to hold similar meetings with other dealers around the country.

A restitution plan would come in the wake of the $14.7 billion settlement VW late last month accepted as part of a deal with U.S. regulators. That package covers only the maker’s rigged 2.0-liter turbodiesel, however. The maker and the government are still working on an agreement covering the bigger, 3.0-liter diesel used in various VW, Audi and Porsche brand products.

Despite ramping up its incentives, Volkswagen brand sales slipped 22% year-over-year for June, and the maker is down by double-digits since the U.S. Environmental Protection Agency revealed the subterfuge in September 2015.

VW hopes to have a fix for the most recent TDI models ready to go by October.

Part of the problem is that VW – and the Audi and Porsche brands – cannot sell any of the 2.0- and 3.0-liter diesels until the German carmaker comes up with a fix acceptable to the EPA and the California Air Resources Board. CARB last week rejected a proposed plan for the 3.0-liter turbodiesel.

(Click Here to find out why CARB give the fix the thumbs-down.)

Unfortunately for VW and its dealers, diesels had accounted for about a quarter of the flagship brand’s total U.S. sales prior to the scandal. VW has struggled to get traditional diesel buyers into conventional gasoline models and the hit to the brand’s image has further weakened demand.

A number of dealers have filed suit against the automaker demanding compensation for their losses. It remains to be seen whether the dealer body will accept the offer Volkswagen is working up. Some franchisees may continue to pursue larger payouts in court even if the majority of dealers accept the plan.

According to a report by the Wall Street Journal, more than 150 dealers from the Northeast gathered at a New Jersey hotel to hear about Volkswagen’s compensation plan, several of the attendees told the paper.

According to various industry sources, a number of VW dealers had been trying to unload their stores in the wake of the scandal, fearing long-term losses. Trade publication Automotive News has indicated that some dealers have decided to stick with the brand as a result of the settlement announced between VW, the EPA, CARB, the U.S. Justice Department and the Federal Trade Commission.

Under that deal, the make will spend up to $10 billion to repurchase the 475,000 vehicles using the rigged, 2.0-liter diesels. Another $2.7 billion will go into an environmental remediation program, with $2.0 billion more set aside to help promote the sale and use of zero-emission vehicles.

VW initially billed its diesels as an alternative to hybrid-electric vehicles like the Toyota Prius. But along with better mileage and lower emissions, it claimed products like the Jetta TDI also could deliver much better levels of performance.

VW told dealers gathered in New Jersey that it expects to have a modification for the most recent version of the 2.0-liter diesel available by October that would allow them to go back on sale.