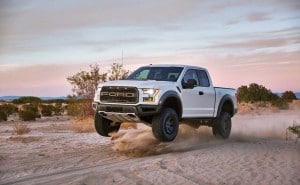 Sales of trucks are on the rise to due cheap gas prices, which may impact future fuel economy mandates.

Federal regulators have opened the door to rolling back the aggressive fuel economy standards set to go into effect by 2025, acknowledging that cheap gas has drastically shifted the type of vehicles that American motorists are buying.

The new report indicates a target of somewhere between 50 and 52.6 miles per gallon is more realistic than the original, 54.5 mpg goal, according to the new study. The first step in what will likely be a two-year “mid-term” review of the Corporate Average Fuel Economy, or CAFE, standards, the study was jointly produced by the Environmental Protection Agency and the National Highway Traffic Safety Administration.

“Compliance isn’t based on what we build, but what consumers buy,” said Gloria Begquist, vice president of the Automotive Alliance, an industry trade group based in Washington, D.C. As things now stand, she stressed, “It’s going to be very difficult” to meet the original target.

After years of relative stagnation, Washington regulators began ramping up the CAFE standard once the Obama Administration took office. In 2011, the 54.5 mpg target was announced following an unusual, joint effort between government regulators and industry officials. But the figure, which would roughly double the U.S. mileage mandate at the beginning of the millennium, made a number of assumptions, and some key ones have proved wrong.

The most significant shift has occurred at the gas pump. Back in 2012, when the latest CAFE targets were finalized, gas prices averaged $3.68 a gallon. It would soon top a record of more than $4, and many experts anticipated it would soon reach $5, and even $6. Instead, the AAA says gas currently averages around $2.36 a gallon nationwide for regular unleaded.

In the American automotive marketplace pickups, utility vehicles, vans and other light trucks now account for about 60% of new vehicle sales. Research by the University of Michigan Transportation Research Institute has shown that after years of relatively steady increases in fuel economy, the average fuel economy of the typical new vehicle has stagnated and even declined during the last year. 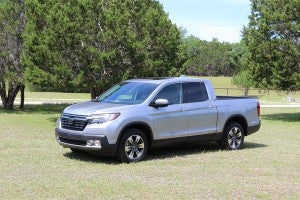 Not only are there more trucks being sold, there are more entries in the full-size segment, including the return of the Honda Ridgeline.

Whether Washington actually rolls back the mileage rules is far from certain, however. The CAFE system actually was designed to reflect shifting market trends. For one thing, it breaks vehicles down into individual categories, from the smallest passenger sedans, coupes and hatchbacks to the biggest pickups and SUVs.

The report notes that within individual categories, the trend is still moving towards ever better mileage. It’s just that more big vehicles are being sold, and their lower fuel economy numbers have driven down the industry average.

But even among trucks, there have been major improvements, with more to come. General Motors recently became the first to deliver more than 30 mpg from a pickup using a new diesel engine in its midsize Chevrolet Colorado and GMC Canyon models. Ford, meanwhile, added as much as 6 mpg to its bigger F-150 model last year by switching from a steel body to lighter aluminum, and a new 10-speed automatic gearbox will drive up the efficiency of the 2017 F-150 update.

In fact, 100 of the latest utility vehicle and pickup models now on the market already meet the rising CAFE target for 2020.

If anything, that says the standards could be met, said Shannon Baker-Branstetter, energy policy counsel for Consumers Union (CU), the policy and advocacy division of Consumer Reports. “Fortunately, automakers are already beating today’s standards and will continue rolling out new technologies to allow them to meet the 2025 standards, with net savings for consumers.”

The problem is that sales of the market’s most fuel efficient models have tumbled sharply as truck sales surge. The Toyota Prius, the world’s most popular hybrid, was down 25% for the first half of 2016, even with the launch of an all-new version of the hatchback offering improved performance and handling.

At one point early in the administration, the Obama White House had expected to have 1.5 million plug-based vehicles on the road by 2015. The reality was barely a third of that number, and combined sales of plug-in hybrids and pure battery-electric vehicles declined last year for the first time since the beginning of the decade.

That said, proponents continue to predict growth in high-mileage and battery-based vehicle segments – especially as the technology improves and prices drop. With the addition of the $35,000 Model 3 late next year, Tesla Motors CEO Elon Musk is predicting the company will boost sales to 500,000 in 2018, nearly 10 times its 2015 volume.

To continue driving up fuel economy, industry analysts say some form of electrification, from so-called “mild” hybrids to pure battery-electric propulsion, will be needed for virtually every vehicle on the market, including SUVs and pickups. There are some tentative steps in that direction. Fiat Chrysler Automobiles is launching a plug-in version of the new Chrysler Pacifica minivan next year.

But those seeking a rollback of the current mileage standards contend that the technology will drive up vehicle costs and price many of today’s buyers out of the market.

The new report will be followed by a 60-day public comment period and then additional study by the EPA and NHTSA before a final decision on the 2015 goal must be locked down – no later than April of 2018.

Though regulators have tried to take a scientific approach to the CAFE debate, politics have not taken to the back seat. Environmental groups and other proponents insist the 54.5 mpg target must stand, but opponents are looking towards the presidential election and hoping that with a GOP victory the numbers would be more likely to be cut back.

Even if the current target numbers hold for individual segments, the new EPA/NHTSA report says, the overall industry average could dip below the 54.5 goal, reflecting strong truck demand.

(To see more about the ongoing slide of gas prices, Click Here.)

In fact, even if the industry somehow manages 54.5 miles a gallon, that won’t really be what consumers actually get. Because of various adjustments made in testing procedures over the years, as well as various credits offered to manufacturers for doing things like marketing flexible fuel vehicles, the real average will likely come in somewhat under 45 mpg.