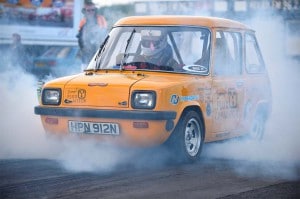 But don’t expect to go find the Enfield 8000, which has been out of production since the 1970s – and even if you do, it won’t quite match the performance of the modified model that passed through the trap clocking a record-smashing quarter-mile run of 9.86 seconds over the weekend.

“I’m in awe of what this little yellow thing can cope with,” said John Wayland, the anchor of the British TV show, Fifth Gear. “I set out to build a British electric hot rod. I hope I’ve achieved something leftfield enough to prove that David certainly can beat Goliath.”

Wayland teamed up with customizer Adrian Flux to transform the old Enfield into what they’re now calling the Flux Capacitor. Along the way, they boosted the battery-cars output 100-fold, from a mere 8 horsepower to 800, with torque rocketing up to 1,200 pound-feet. 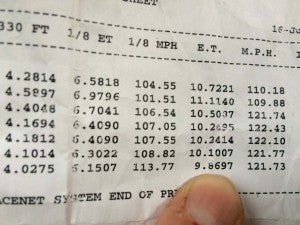 The original Enfield 8000 was a product of the twin oil shocks of the 1970s, produced at a short-lived operation on the Isle of Wight. The car that made the record run was damaged in a flood and sent to the junkyard, four years ago, before undergoing a complete restoration.

In its original form, it was lucky to hit a top speed of 40 mph. But the Flux Capacitor took just six seconds to hit 113 mph, and finished the quarter-mile in 9.86 seconds at an average 121 mph.

That snatched the speed record away from an old Datsun that had been converted to run on electric power and hit the quarter-mile mark in 10.25 seconds.

(Hyundai working up 250-mile EV. Click Here for the story.)

Wayland and Flux spent most of their time working on the Capacitor’s drivetrain, the vehicle making its dash for the record, “without any aerodynamic alterations,” the Fifth Gear host explained.

“The original designer John Ackroyd…spent a lot of budget on the aerodynamics, and went on to work with Richard Noble on Thrust 2,” explained Wayland, referring to the supersonic land-speed record car.

With a mere 68-inch wheelbase – and a total length of 112 inches — there was some question about whether the Flux Capacitor could handle the quarter-mile run. Another challenge was simply finding space for the electric drivetrain. 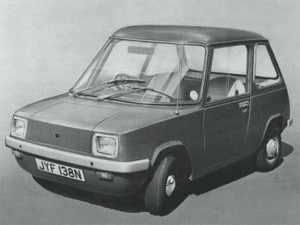 The development team squeezed 188 lithium-ion battery cells into every possible nook and cranny of the converted Enfield. The pack produced 2000 amps of current at 400 volts to run a pair of 9-inch DC motors driving the rear wheels. The batteries, it turns out, were originally developed for the Bell Super Cobra attack helicopter, where they are used to power the miniguns and start the engines.

Turning 9.86 in the quarter-mile is no mean feat, and the little Enfield not only got there faster than a Tesla P90D, but the McLaren 650S and Lamborghini Aventador, as well.

But it really is street legal, something it had to prove by completing a mandatory 26-mile drive. The Flux Capacitor could not use wheelie bars, and it rode on conventional, treaded tires.

The little car can even claim to be both tax exempt under British rules encouraging zero-emission vehicles, and it gets a pass on the London congestion tax that applies a stiff premium for conventional vehicles driven into the British capital.