Tesla Production Up, But Sales Fall Short of Goal 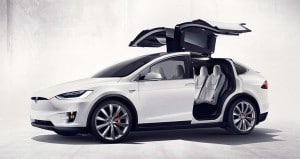 The Model X accounted for barely a third of Tesla's second-quarter production.

While the U.S. new car market is clearly slowing down after a spectacular rebound from the Great Recession, Tesla Motors continues to boost sales at a double-digit pace – but still managed to fall short of expectations.

Tesla says it delivered 14,370 vehicles during the second quarter, but that was 15% less than the 17,000 the battery carmaker had predicted as recently as May. While Tesla had been hoping to roughly split production between the Model S sedan and newer Model X battery SUV, volume was still weighted more than two-to-one towards the electric sedan, apparently reflecting ongoing quality and production problems with the utility vehicle.

News of the weak market performance comes at an inopportune time for Tesla. The maker is facing an investigation by the National Highway Traffic Safety Administration over the fatal crash of a Model S being driven in semi-autonomous Autopilot mode. There has been growing concern about the system, with numerous reports of it being misused by owners.

Going into 2016, Tesla CEO Elon Musk had indicated a goal of boosting total production at the company’s Fremont, California assembly plant to nearly 2,000 vehicles a week. The company revised that target to 20,000 for the April-June quarter. But while it did manage to boost output 20% over the first quarter of 2016, production still missed its target, coming in at just 18,345.

On the positive side, nearly half of that output came in June, appearing to support recent Tesla claims that it is working through some of the bugs with Model X production. The company has been besieged by claims of quality issues, especially with the battery-ute’s distinctive falcon wing doors. The problems led normally supportive Consumer Reports magazine to issue a warning about Tesla’s quality.

The carmaker recently underwent a major shake-up in its production operations, with a new manufacturing chief among those brought in to help prepare for next year’s roll-out of the maker’s first mainstream battery-electric vehicle, the Model 3.

Tesla has regularly missed its targets, both for product launches – the Model X, for example, coming to market two years late — and for production and sales. The second-quarter shortfall raises new concerns about Musk’s aggressive production and sales goals for the Model 3. During the March 31 preview of the $35,000 sedan, the Tesla founder and CEO said he hoped to launch production in the third quarter of 2017 and build as many as 200,000 of the battery-cars by year-end.

Musk also said, during the Model 3 preview, that Tesla is moving up its goal of rolling out at least 500,000 vehicles annually by 2018. That forecast generated a fair bit of skepticism even before it became apparent the maker would miss its second-quarter 2016 sales target.

A Tesla illustration shows the Model S sensors watching the road for the driver.

Nonetheless, the fact that production during June approached 9,000 vehicles could also be seen as a positive sign for the maker’s effort to get factory operations finally in order.

But Tesla may now be facing a different sort of issue.

Late last year, the carmaker used its ability to wirelessly update the technology in its vehicles to release the new Autopilot feature. Though the semi-autonomous system is supposed to allow only limited hands-free driving, there are numerous reports of drivers going well beyond what Tesla says was intended.

That may have been a factor in the death of 40-year-old Joshua Brown on a highway in Williston, Florida on May 7. What is known is that the both the Model S crash-avoidance system and the driver failed to respond when a semi-trailer cut in front of the sedan to make a left turn. There have been some claims Brown was either watching a movie or playing a game and was not watching the road.

Ultimately, autonomous technology is intended to take complete control of a vehicle, but today’s less advanced systems are meant to assist, rather than take over for, the driver. Tesla not only lays out clear user guidelines but, lifting a page from the computer and smartphone world, advises motorists Autopilot is in the beta, or development stage.

But Tesla has also touted the systems capabilities and, intentionally or not, that appears to be encouraging some drivers to push the limits. Some have posted videos on Youtube and elsewhere showing just how far they can go with the system, including jumping into the back seat.

The investigation into the May crash comes as the National Highway Traffic Safety Administration is in the public comments phase as it prepares the first federal guidelines for autonomous vehicle technologies. A number of critics have complained that the agency is moving too fast and the Tesla crash could impact NHTSA’s final guidelines.