Mazda Rebooting as a Premium Brand

Maker moving away from focus on volume sales. 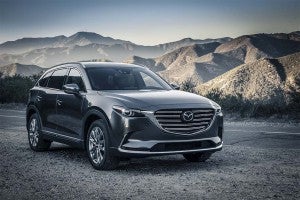 Mazda's new 2016 CX-9 is the first entry in the company's next generation of vehicles born out of a new strategy.

Mazda has watched its sales in the U.S. decline this year, which has put substantial pressure on one of the world’s smallest international companies.

But a key executive, Masahiro Moro, who is both the chief executive of Mazda North America and the company’s chief marketing officer, told a group of reporters in Detroit that the decline reflects the company’s efforts to shift its strategy 180 degrees to focus not on building volume, an old strategy that in theory builds profitability by lowering piece costs, rather it is zeroed in on building relationships with customers.

Building volume is no longer effective for a relatively small company, such as Mazda.

Thus the company has deliberately slashed fleet sales, while re-building its relationships with customers. The emphasis now is on brand loyalty and strengthening residual value, which in turn nurtures the proposition that Mazda’s vehicles are a good value, said Moro, who in January replaced Jim O’Sullivan as the company’s top executive in North America.

The goal is to create a customer experience that is comparable to other premium brands, characteristics and actions that have been critical to building the value of companies such as Apple, Google and Amazon, he said. “Our plan is to create a smart alternative to premium brands,” he said. 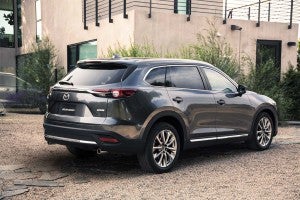 Mazda is hoping the new CX-9 will foster a new more upscale image of the automaker.

At the same time, Mazda is in the midst of a product revolution aimed specifically at maximizing efficiency through better design, reducing the weight of its vehicles while maintaining the driving dynamics that are critical to re-enforcing Mazda’s identity as a builder of vehicles for motorists who like to drive.

Mazda has just completed the first phase of its product revolution with the introduction of the Mazda CX9 crossover utility vehicle, which incorporates the “SkyActiv” technology and Kodo design cues, he said.

The next or second generation created in the wake of the global recession in 2008-2009 that rocked the company to its foundations is now due out in 2021, Moro said.

Mazda already has posted some key victories with its new strategy, having the best fuel economy of any vehicles sold in the U.S. for the past three years.

(Mazda CX-9 a contender for North American Utility Vehicle of the Year. Click Here for more.)

Moro also said Mazda is also building relationships with partners in the auto industry. It builds vehicles for Toyota at a new plant it manages in Mexico and builds cars for Fiat at plant in Japan. It also has access to battery electric and hybrid technology from Toyota.

The relationship with Toyota has some limits but it is helping the Mazda meet new fuel economy regulations on the horizon in the U.S., China, Japan and the European Union.

Earlier this month, Mazda also said a new deal with Isuzu. Under the terms of the agreement, Isuzu will supply Mazda with a new small pickup truck to replace the small truck now built in Thailand in a joint venture with its old partner, Ford Motor Co.

The new Mazda trucks developed by Isuzu won’t be coming to the U.S. but it will strengthen Mazda’s position in the vital markets of Southeast Asia. In addition, the capacity from the plant in Thailand that is now devoted to pickup trucks will be opened up to build “other vehicles,” he said.