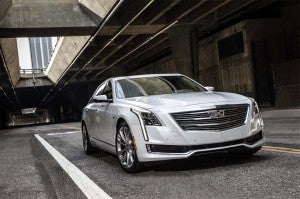 GM will debut Supercruise on the Cadillac CT6.

Wary of the problems that appear to have caused the fatal crash of a Tesla Model S running in semi-autonomous mode, General Motors wants to take a bit more time before rolling out its own Supercruise system.

And that should allow GM to be much more confident that the technology will work as planned, said Mark Reuss, General Motors’ global product development chief. Among other things, once Supercruise makes its debut on the Cadillac CT6 sedan, it will feature a retinal recognition system designed to make sure that a driver is paying attention to the road, even if their hands aren’t on the wheel.

The May 9th Tesla crash appears to have been the result of a system malfunction that failed to recognize when a truck turned in front of the Model S sedan. But there are also some indications the 40-year-old driver was distracted, possibly watching a video on a laptop computer, rather than acting as a human backup to the Autopilot system.

(Click Here to learn why Fiat Chrysler is paying a “bug bounty” to hackers.)

The first fully self-driving vehicles aren’t expected to start rolling out until early in the coming decade, but partially autonomous models are already hitting the road, including the Model S. That system relies on a “sensor fusion,” blending a video camera mounted above the rearview mirror, and a radar sensor in the grille. 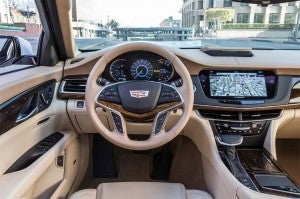 The CT6 instrument panel features a 12.3-inch display. Lights on the steering wheel will show when Supercruise is active.

The General Motors Supercruise system goes a step further. It compares the data from its own camera and radar with information contained in a highly detailed 3-D map. That’s far more accurate than the current, satellite GPS-based navigation systems of today, but it requires extensive new mapping of roads around the country using a laser-based system called LIDAR, or Light Detection and Ranging.

The camera system in GM vehicles is provided by Mobileye, a high-tech company based in Tel Aviv, Israel. The two companies are planning to use the technology to crowdsource mapping. If there are any changes on a route already mapped by GM using its LIDAR system — such as detours or even temporary delays, such as a broken-down vehicle – that will be sent to the cloud and relayed to other vehicles in the area.

GM officials aren’t saying whether that feature will be activated by the time Supercruise makes its debut. But by using the extremely detailed LIDAR maps, vehicles will be able to follow a route with an accuracy of less than 10 inches.

It will also allow so-called “geo-fencing.” Only when the vehicle is driving on roads mapped with the LIDAR system and considered safe for semi-autonomous driving will Supercruise be activated.

At that point, lights on the CT6’s steering wheel will light up to indicate Supercruise can be activated. When the vehicle approaches the edge of the geofenced road, meanwhile, it will alert the motorist to take over driving duties. 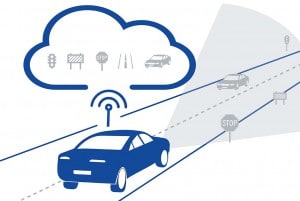 GM and Mobileye will use the car's videocamera to crowdsource updates to its 3-D maps.

Even in hands-free mode, however, the GM system will require that the driver stay both alert and in a position to step in quickly in an emergency. Critics say that is a weakness of the Tesla Autopilot system. Officially, the California automaker tells drivers they must remain alert, but even the very name, Autopilot, suggests they can tune out, according to critics.

The Tesla system – and several other semi-autonomous technologies now on the road – use steering sensors to look for minor inputs to suggest the driver regularly puts hands on the wheel. But there is significant evidence that such technology can be fooled.

So, GM engineers came up with an alternative option, a retinal scanner that not only can tell if a driver is looking at the road, but also detect the drooping eyelids that suggest sleepiness. In either case, the system will advise the motorist it is ready to shut down.

GM was originally expected to introduce Autopilot soon after the launch of the new 2017 Cadillac CT6, but the project has been pushed back, according to Reuss, who said, “It won’t be ready ’til it’s ready.” It is now likely to be out by the end of next year, which would make it a 2018 model-year option.

(For more on the delay of Supercruise, Click Here.)

Further snags could yet delay the launch. GM, like the rest of the auto industry, is watching closely as both the National Highway Traffic Safety Administration and the National Transportation Safety Board initiate investigations into the fatal failure of the Autopilot system.

“We cannot wait for perfect,” said NHTSA chief Mark Rosekind, during a visit to Detroit, as he pointed out that the numbers of lives lost in U.S. highway crashes rose 8% last year after a decade of decline. “We will lose too many lives waiting for perfect.”