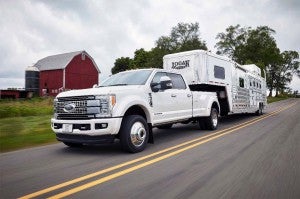 Pickup sales are hot right now, but competition is heating up even faster, and automakers are putting more emphasis than ever on the durability and capabilities of their trucks in a bid to win over buyers.

In recent months, fuel economy and cargo bed toughness have been spotlighted by various makers. Now, Ford Motor Co. is turning to towing capacity as it reveals specifications for the new, aluminum-bodied version of its big F-450 Super Duty model.

Ford says the heavy-duty version of the more familiar F-150 will be able to tow up to a 21,000-pound trailer, about 1,000 pounds more than competitive models. Add a fifth-wheel package and towing capacity jumps to 27,500 pounds, or more than a ton over the competition, according to Ford.

“This is the best heavy-duty truck we’ve ever made,” says Doug Scott, Ford truck marketing manager.

After falling sharply during the Great Recession, pickup sales have posted a strong rebound over the last few years. But competition has also accelerated. Nissan recently launched the second of two new versions of its Titan truck. Toyota has been tinkering with its Tundra model, as well. And Detroit’s Big Three have been steadily trying to one-up each other, as well.

There’s also been a boom in the long-declining midsize truck segment, with an updated Toyota Tacoma, new versions of the old Chevrolet Colorado and GMC Canyon and an all-new Honda Ridgeline. The latter model is based on a car-like crossover platform, rather than a traditional, body-on-frame chassis, so Honda has been working hard to convince potential buyers Ridgeline is more than a faux truck. 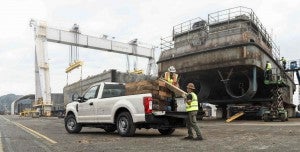 For commercial users, towing and cargo capacity are critical benchmarks.

Among other things, the Japanese maker dropped a ton of large rocks into the bed of a new Ridgeline to show off its durability, a move other makers have now tried to duplicate.

But towing and cargo capacity are two critical benchmarks for real work truck buyers, and that has long been one of the industry’s hottest battlegrounds. The good news for buyers is that automakers recently agreed to adopt standardized measurements set by the Society of Automotive Engineers, rather than the often questionable, brand-specific numbers.

Using the SAE guidelines, Ford says it has made some big improvements in the capabilities of the 2017 F-450 Super Duty, the truck now capable of hauling a 21,000-pound trailer – and bumping that to 27,500 using a fifth wheel configuration. The F-450 also can handle a maximum payload capacity of 7,630 pounds.

Ford was able to boost the numbers of the 2017 Super Duty models because of several big changes. Primary was the switch from traditional steel to an “aluminum-intensive” body that shaves off about 350 pounds compared to the old versions of the heavy-duty trucks. Ford already made the shift to aluminum on the mainstream F-150, cutting its mass by as much as 750 pounds.

To achieve maximum payload, the F-450 Super Duty needs to be ordered with Ford’s 6.7-liter Power Stroke V-8 turbodiesel. Diesels have been a mainstay on the heavy-duty side of the pickup business for some time due to their stump-pulling torque and fuel economy.

Diesels are also making their way into the more mainstream part of the truck market. Fiat Chrysler was first to offer an “oil burner” on its Ram 1500 model. Nissan has gone diesel with the new Titan, as well. And General Motors took the unexpected path of offering a diesel package on its midsize Colorado and Canyon trucks – making them the first ever to top 30 mpg on the highway.

Mileage has become a major selling point, along with towing and cargo capacity, and with tough new fuel economy standards being phased in, expect to see steadily improving numbers. Ford, for example, is launching an all-new 10-speed transmission on the F-150 pickup for 2017.

(Fiat Chrysler investing $1 bil to tool up for new Jeeps. Click Here for the latest.)