Ford and FCA fail to crack this year's lists. 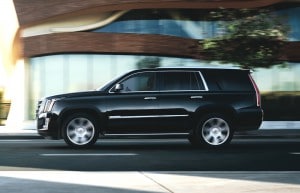 The 2016 Cadillac Escalade captured the President's Award in AutoPacific's 2016 Vehicle Satisfaction Awards, meaning it earned the highest score ever.

The measure of a great car, truck or utility vehicle can be taken many ways, but few are as effective a tool as owner satisfaction: Did you like what you paid big money to buy?

AutoPacific released its annual Vehicle Satisfaction Awards and this year, it appears some Cadillac owners really, really love their Escalades.

The 20th iteration of the list saw the luxury SUV take the top two honors that can be had in this survey: The Most Satisfying Vehicle Overall and the President’s Award, with the latter perhaps being the most impressive.

The President’s Award isn’t given out yearly, but only when a vehicle’s overall score exceeds the previous high score for a vehicle. To date, only three other vehicles have won the honor: the 2015 Kia K900, 2014 Mercedes-Benz S-Class and the 2010 Hyundai Sonata.

AutoPacific’s Vehicle Satisfaction Awards objectively measure owner satisfaction with 50 separate attributes ranging from interior comfort and styling to fuel economy and performance. “VSAs look at the big picture, which includes owners’ experiences with their vehicle’s quality and safety, but also goes deeper into the heart of the ownership experience,” said AutoPacific President George Peterson in a statement.

Tesla captured the highest satisfaction premium brand award in the 2016 Vehicle Satisfaction Awards by AutoPacific: its first year in the survey.

This year’s results highlighted the difference between owner satisfaction and other more objective measures of what makes a vehicle good. The highest satisfaction popular brand was Kia and it also won three individual segments.

The big winner for premium brand? Tesla. The win comes despite a series if high-profile, much reported problems with Tesla’s Model S and Model X vehicles. However, that didn’t matter to owners. In its first year on the survey, it won the category “by a considerable margin (23 points). They hold the top spot this year, though Cadillac has closed the gap considerably with the highly satisfying Escalade and increases in owner satisfaction across their line-up,” Peterson noted.

In all, there were 23 vehicle segments and of those, six winners were redesigned for the 2016 model year. The winners in the passenger car division were:

“While six of the winning vehicles were redesigned for the 2016 model year, the Kia Optima and Chevrolet Camaro have greatly exceeded the scores of their nearest segment competitors,” Peterson noted. The truck winners included:

This year also marks the first year that neither Ford Motor Co. nor Fiat Chrysler Automobiles NV had a winning vehicle.

“Over the years, Ford has consistently had high-scoring trucks and SUVs while Lincoln has had several luxury car winners,” said Peterson. “Historically, FCA has not been as strong; however, the Jeep Grand Cherokee was on a five-year winning streak and had that taken away by the Toyota 4Runner this year.”

Overall for 2016, General Motors received the most wins with seven, followed by Kia and Nissan each with four, Mercedes-Benz with three and Hyundai and Toyota each with two wins. Volvo, Honda and Tesla each took home one win.