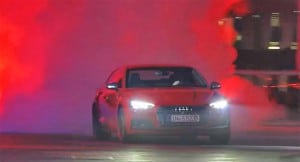 The 2017 Audi A5 makes its splashy debut at the automaker's headquarters in Ingolstadt.

Audi’s original A5 set a high benchmark, winning raves and drawing many buyers back to coupes. So, when Audi dimmed the lights at its Ingolstadt headquarters for the reveal of the new 2017 A5 remake, it was clearly going to have to clear some tough hurdles.

Based on initial reactions at the event, it seems the German maker may have pulled it off, the 2017 Audi A5’s exterior design marking the first time the luxury brand has translated the well-reviewed Prologue concept vehicle into a production model.

The new coupe is “the perfect fusion of form and function,” declared CEO Rupert Stadler, during the flashy evening event at Audi HQ. While many coupes sacrifice practicality for styling, he stressed, the new A5’s design “doesn’t mean compromise.”

(Audi bucks the trend, posting strong sales even as the U.S. market falters for May. Click Here for more.)

While key details weren’t released, Audi officials, the 2017 Audi A5 appears to be both lower and wider than the vehicle it replaces. The hood is lower slung, and the brand’s trademark singleframe grille broadens out noticeably, anchoring twin cats-eye LED lamps. 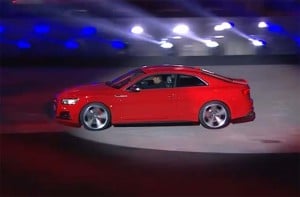 The overall shape retains some of the basic lines and curves of the outgoing Audi A5, particularly when it comes to the roof and C-pillar. But where former Audi design chief Walter da Silva personally opted for a rather slab-sided look on the old model, Andreas Mindt, the exterior designer for the 2017 A5, went with something more sculptured.

There’s a rising accent line running wheel-to-wheel above the rocker panels, and an even more prominent detail is the character line that stretches from hood to trunk, flowing almost like a puff of smoke in the wind tunnel.

A look at the rear’s sharp edges reveal that Audi designers put a high premium on aerodynamics. The 2017 A5’s 0.25 drag coefficient is the lowest in the segment.

The basic design cues of the A5 will reappear on a wide variety of new models, including the next A8 flagship, all derived from the Prologue concept that made its debut at the 2014 Los Angeles Auto Show.

(Audi has several key models coming for 2017. Click Here for a look at all the new model-year’s hot products.)

Engineering specifics were in short order, though we should be hearing more soon, the order books for the 2017 Audi A5 set to open in Europe next month.

There will be five engines for the new Audi A5 and an all-new turbo 3.0-liter six for the S5.

At launch, there will be at least two versions, the “base” A5 and sportier S5, with an RS5 and a Sportbackexpected to follow within a year or so, according to close sources. The S5, incidentally, accounts for about 25% if total sales for the midsize coupe’s family.

There will be five engines offered in Germany when the new A5 goes on sale, according to Stefan Knirsch, the Audi AG board member in charge of technical management. That includes a new turbo powertrain. The line will include two gas and three diesels for the European market, power ranging from 187 to 282 horsepower in the A5. The S5 will get that new 349 hp turbo 3.0-liter TFSI six, and is expected to deliver 0 to 60 times of just over 4.5 seconds.

Significantly, Knirsch noted, the engine family will get, on average, about 20% better mileage, even as the powertrains get a roughly 20% boost in output.

One reason for the better mileage is the fact that Audi has trimmed about 60 pounds of mass out of the new A5 line-up.

The Ingolstadt preview offered only modest information about the new A5’s interior, though the basic design is lifted almost whole from the recently launched Audi A4 sedan. That includes the new Virtual Cockpit display replacing conventional gauges. 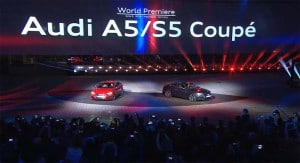 Audi will offer both the A5 and S5 at launch, with an RS5 and the Sportback models to follow.

“It is the future mobile device,” suggested Dietmar Voggenreiter, Audi’s board member for sales and marketing.

The new 2017 Audi A5 offers over 30 AudiConnect infotainment functions. That includes the ability to impact a calendar from a driver’s smartphone, not only reading out appointments by voice but automatically setting navigation destinations to get to those meetings.

Specific details on U.S. plans for the 2016 Audi A5, including launch timing and pricing, should follow soon.