New facility will be most advanced plant in its system. 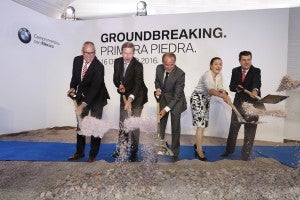 BMW and Mexican officials kick off construction on the automaker's $1 billion plant in San Luis Potosi.

The BMW Group has broken ground on a new billion-dollar plant in Mexico, the latest in a growing string of automakers to move operations into the Latin American nation.

Significantly, BMW’s $1 billion investment is part of a transition for Mexico from a manufacturing base for price-sensitive, entry-level models to higher-end products, BMW’s rivals Audi and Mercedes-Benz set to open their own Mexican plants.

With the addition of the BMW, Mercedes Audi plants, as well as those planned by Kia, Ford and other makers, there will soon be more than 20 assembly operations in Mexico, making it one of the world’s top five sources for automobiles.

And where earlier Mexican factories largely depended upon low-cost manual labor, rather than robots, BMW boasts that, when complete, the san Luis Potosi plant will be among the most modern production centers for automotive production anywhere in the world, making use of “all of the BMW Group’s knowledge and capabilities,” according to Board of Management member for Production Oliver Zipse.

San Luis Potosí will assemble the German marque’s best-selling model series, the BMW 3 Series Sedan. It will also balance out production capacity at the BMW Group Plant in South Africa, which will be shifting from the 3-Series line to the new BMW X3 in the future. 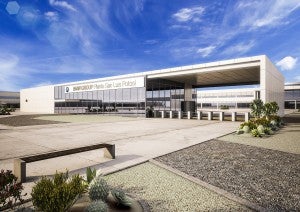 The new BMW plant in San Luis Potosi will build the 3 Series once it's up and running in 2019.

Start of production is scheduled for 2019, with an annual production capacity of up to 150,000 units. The BMW Group is investing around $1 billion in the new plant and creating at least 1,500 new jobs. The decision to locate in San Luis Potosí was based on criteria such as the increasingly broad supplier network and qualified local workforce, Zipse said during the ground-breaking ceremony.

The BMW Group Plant San Luis Potosí will be a full plan with body shop, paint shop and assembly. From the first full year of production, the plant also will be the BMW Group’s most resource-efficient production location worldwide, Zipse said.

For example, the use of renewable energy sources ensures that the plant is supplied with 100% CO2-free electricity. A solar system on the plant’s grounds is expected to provide much of the facility’s electricity. BMW says it will take addition stops to reduce water usage, the factory planned to have the group’s first paint shop to produce zero process wastewater. The water needed for the painting process is reconditioned and recycled.

(BMW updates i3, boosts range. Click Here to check it out.)

BMW’s Munich plant will will train more than 500 Mexican employees by 2019 and play a lead in helping set up the new factory.

“The training program for future employees is an important cornerstone for us. The new plant will set international standards with innovative technologies and resource-saving production,” said Hermann Bohrer, head of the BMW Group Plant San Luis Potosí.

Until recently, there were concerns about whether Mexican factories could handle high-end automotive products, but all three of the major German luxury brands will soon be operating in the country. The Audi plant will become the only global source for the Q5 SUV, for example. Mercedes-Benz, meanwhile, will produce some of its smaller models at a factory it will share with Infiniti – the luxury arm of alliance partner Nissan.

All told, Mexico saw a 40% jump in total automotive production from 2008 to 2014, compared to 15% for the U.S., according to the Michigan-based Center for Automotive Research. And it is expected to see similar growth going forward.

That has resulted in some political turmoil, presumptive GOP presidential candidate Donald Trump curiously singling out Ford Motor Co. for its plan to shift some small car production to Mexico. Ford says it plans to go ahead with that project.