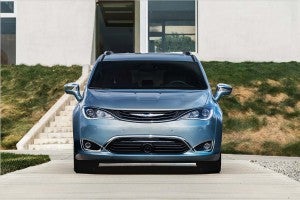 A self-driving Pacifica is one step closer to reality with today's announcement from FCA and Google.

Google and Fiat Chrysler Automobiles are about to put things on autopilot, the two companies teaming up on a program aimed at bringing self-driving vehicles to market in the near future.

The two have confirmed an alliance, rumored for more than a week, that will see Google acquire 100 of FCA’s new Chrysler Pacifica minivans. They will help the tech giant more than double its current fleet of autonomous vehicle prototypes, the two firms announced late Tuesday. That could eventually see Google technology used in FCA’s production vehicles, though no formal plans for that move have yet been locked down.

“This announcement is a recognition of the fact we found a sharing of the minds with Google,” said FCA CEO Sergio Marchionne, his counterpart at Google, autonomous vehicle chief John Krafcik saying the Silicon Valley firm saw the Detroit maker as “nimble and experienced.”

“The fact (is) that they’re totally aligned with what we need to do at this stage, which is build more vehicles and get more testing miles under our belt,” said Krafcik.

Google is considered one of the leaders in autonomous vehicle research by industry experts, such as the tech consulting firm Juniper Research. It already has dozens of prototype vehicles on the road, including a number of modified Toyota and Lexus vehicles, as well as a growing number of “Google Cars,” custom-made by Detroit auto supplier Rousch.

Google has expanded its field testing to four locations, including the area around its Mountain View, California headquarters, as well as the Phoenix region. It was not revealed precisely where the modified Pacifica minivans will be used. But Krafcik said earlier this year that it is critical to get even more experience in diverse geographic and climactic conditions. Operating on poorly paved roads and in snow and ice pose some of the biggest challenges for the engineers developing autonomous technology.

In a statement, Google noted, “FCA will design the minivans so it’s easy for us to install our self-driving systems, including the computers that hold our self-driving software, and the sensors that enable our software to see what’s on the road around the vehicle.”

If and when the partners will move to use the Google technology in a production vehicle is unclear. But Krafcik has, on numerous occasions, stressed that the tech firm does not intend to go into automotive manufacturing, but would rather license its technology to a partner.

In turn, FCA CEO Marchionne has repeatedly indicated his desire to form partnerships that can improve the automaker’s economies of scale and help it access technologies that might be too difficult or expensive to develop on its own. The carmaker has been rebuffed by several traditional automotive manufacturers, including General Motors, Ford and the Renault-Nissan Alliance, but Marchionne last December hinted FCA might also seek a non-traditional alliance.

The deal announced Tuesday is non-exclusive, and both companies appear to be looking for other partnerships. According to some previously published reports, Google had a proposed deal with GM break down because of a dispute over ownership of intellectual property and data. Another deal, this one with Ford, was expected to be announced last January at the annual Consumer Electronics Show. While nothing came of those reports, sources indicate Google and Ford are still talking.

Semi-autonomous technologies are already beginning to roll out, including Tesla’s new AutoPilot system. And industry analysts believe the first fully autonomous vehicles could be on the road by the end of the decade. Nissan has said it plans to have 10 such models in production by 2020.

(Friends and foes speak out at NHTSA’s autonomous hearing. Click Here for that report.)

NHTSA last month held the first in a series of hearings aimed at establishing new guidelines for autonomous vehicles. It expects to have preliminary rules in place by mid-year. That could make it easier for Google, FCA and others to expand testing and set the stage for production programs. But critics have urged the federal agency to go a bit slower until the safety and reliability of the technology can be proven out.