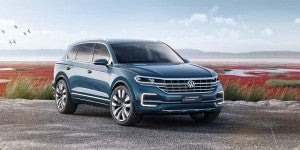 The Volkswagen T-Prime Concept is the automaker's take on a battery-powered full size SUV.

At a time when the long-booming Chinese market is taking an unexpected tumble, two types of vehicles are propping up sales: SUVs and battery-electric vehicles. So, it’s either a mark of good planning, or an instance of especially good luck, that Volkswagen has driven into Beijing with a new concept vehicle that is both.

The Volkswagen T-Prime Concept is, at first glance, a large SUV, a likely hint as to what the German maker is getting ready to add to its ute-deficient line-up. But the Beijing Auto Show car is also a plug-in hybrid that underscores VW’s ongoing shift in focus from diesel to battery-electric technology.

For the Chinese market, the combination could prove especially fortuitous. After long focusing on sedans and other traditional body styles, Chinese consumers have fallen madly, passionately in live with utility vehicles, their sales rising by more than 50% last year. Meanwhile, the leaders of the People’s Republic, desperate to deal with endemic smog problems, have decided to embrace electric propulsion with incentives that run as high as 114,000 RMB, or $17,500 per vehicle.

For now, the T-Prime is but a concept, but it does have some impressive stats. The powertrain pairs a turbocharged 2.0-liter inline-four with an electric motor drawing power from a 14.1 kilowatt-hour lithium-ion battery. The package is paired with an eight-speed automatic sending torque to all four wheels through VW’s 4Motion system.

And there’s plenty of torque to share among those four tires, the T-Prime Concept GTE claims to develop 375 horsepower and 516 pound-feet of torque.

That’s enough to launch the big ute from 0 to 60 in just 6.0 seconds. Not quite the numbers sibling brand Audi is promising for the pure battery-electric SUV due in 2018, but nonetheless a lot more compelling than what most current battery-based vehicles can deliver. Top speed, meanwhile, is said to be 139 mph. 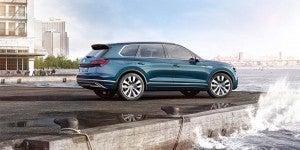 The T-Prime Concept GTE claims to develop 375 horsepower and 516 pound-feet of torque.

And for those who’d like to drive as much as possible in pure electric mode, the T-Prime has a battery range of 31 miles between charges.

The batteries can be recharged while driving in gas mode, according to VW, or one can plug in. Using a 240-volt outlet, the lithium pack will go from empty to full in eight hours. Using a public charging station with a 7.2 kW capacity cuts that to just 2.5 hours, according to the automaker.

In hybrid operation, VW claims 29 miles to the gallon, a figure that jumps to 87 MPGe in plug-in mode. Those number use the European test cycle, however, and likely would dip a bit if the tests were run by the U.S. EPA.

That’s nonetheless impressive considering the T-Prime is longer than the original Volkswagen Phaeton, at 199.6 inches nose-to-tail. It’s 78.7 inches wide and 67.2 inches tall. The concept rides on the new full-sided Modular Longitudinal Platform, otherwise known as the MLB, developed for some of the VW family’s biggest models. 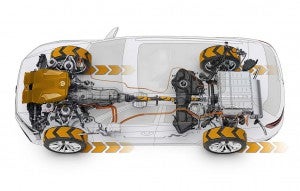 In pure electric mode, the T-Prime has a battery range of 31 miles between charges.

Visually, the Beijing show car won’t come as a surprise to VW fans, though it follows recent trends, adopting a positively massive, near corner-to-corner grille that conjoins twin LED headlamps.

Following up on the debut of the T-Cross Breeze Concept at last month’s Geneva Motor Show, the Volkswagen T-Prime is similarly loaded with an array of advanced connected car technologies.

“The concept vehicle’s progressive interior reflects the desire for the digital capabilities of a new era. It is, simply put, a lot of fun to have a world of displays and controls that consist exclusively of touchscreens, gesture and voice control, touch-sensitive surfaces and shifting ‘by wire,’” explains a Volkswagen news release.

(Click Here for details about the $18.2 billion hit VW is taking for its diesel deception.)

The curved screen of the new Active Info Display angles towards the driver. This “cockpit of the future” places all sorts of vehicle and infotainment functions readily in view of both driver and passenger, using a tiled format that can readily be moved from one position to another. There’s a 3D navigation map, power meter, phone contact images and a media library, among other things. 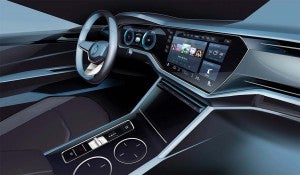 In the VW T-Prime Concept, the curved screen of the new Active Info Display angles towards the driver.

“Very quickly,” contends VW board member Frank Welsch, “this type of human-machine interface could become the norm in the top segment. Progress is immediately apparent here, because the real automobile is melding with the virtual world that is so real today.”

Even the buttons on the steering wheel that have become so common today undergo major changes in the T-Prime. Here, VW offers a touch feedback system more like the one introduced on the Apple iPhone 6S. And it provides a tactile bump when the driver makes a selection.

Slow to embrace the SUV revolution, VW is playing a game of fast follower. It has a new version of the Tiguan coming, as well as a replacement for the top-line Touareg that will bear the imprint of the T-Prime. There will also be two new models, one based off the Golf, the other off the small VW Polo.

(To see more about the criticism of Volkswagen’s settlement with the EPA and CARB, Click Here.)

Elements of the Beijing show car’s high-tech interior, meanwhile, will start to roll out in a variety of new production models, as will the T-Prime plug-in driveline.