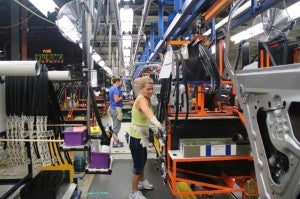 GM is investing nearly $800 million into its Spring Hill, Tennessee, plant as part of a larger investment plan.

General Motors plans to spend $788.7 million for an all-new, high-efficiency engine program, as well as projects to modernize the vehicle programs at its Spring Hill (Tennessee) Manufacturing Plant, creating 792 and retaining 16 jobs.

The GM announcement re-enforces a pattern of new investments in powertrain elements by domestic carmakers as the pressure mounts to meet increasingly tough standards for better fuel economy and cleaner emissions. GM isn’t alone in spending on its manufacturing operations these days.

FCA US is investing $74.7 million in its Trenton Engine Complex outside Detroit, retooling the north plant to produce the next generation four-cylinder engine. The new engine will be assembled on the flexible production line that was installed in 2012 and the new investment means 245 jobs.

The Auburn Hills, Michigan-designed engine will begin production in the third quarter of 2017. The engine will provide increased power, while improving fuel economy and reducing carbon dioxide emissions.

Meanwhile, GM noted since 2010 it has spent $2 billion on Spring Hill operations, including a $148-million investment announced in February to repurpose flexible machining and assembly equipment to build V8 engines.

“This investment will help GM and our workforce continue to put the customer at the center of everything we do, providing them with powertrain solutions to meet their changing needs,” said Arvin Jones, GM North America manufacturing manager.

Cindy Estrada, vice president and director of the UAW General Motors Department, this investment helps secure a bright future for its workforce.

“UAW members at Spring Hill and Bay City have well-earned reputations for quality work and craftsmanship,” said Estrada. “Since the 2015 collective bargaining agreement, GM has invested more than $1.7 billion and UAW-GM members, their families and their communities will all benefit for years to come.”

(Click Here for details about Mitsubishi’s claims that U.S. mileage ratings are accurate.)

Construction will begin in May.

“Spring Hill and its employees have earned a reputation for producing award-winning engines,” said UAW Local 1853 Chairman Mike Herron. “GM recognizes this and we’re thankful they are investing further in the future of this facility and this community.”

Bay City Powertrain, which is the oldest plant in GM’s manufacturing system, produces engine components that are used in Chevrolet, Buick, GMC and Cadillac vehicles.

The plant opened in 1892 as National Cycle Manufacturing Company and produced a new bicycle to replace old high-wheeled types.  In 1916, William Durant and Louis Chevrolet bought the plant and the plant was added to the General Motors portfolio in 1918. With this investment, GM has invested or will invest $249.4 million in Bay City Powertrain since 2010.