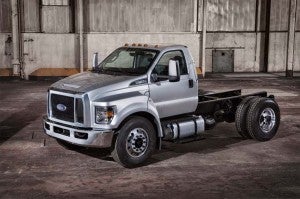 Ford moved production of its F-650 and F-750 from Mexico to Ohio. It's spending nearly $200 million on the plant for the trucks.

Ford Motor Co. announced plans to spend $1.6 billion to upgrade factories in Michigan and Ohio, saying the new investment will create as many as 650 new jobs.

The announcement comes as Donald Trump, who has used Ford as a punching bag during his campaign, moves closer to the Republican nomination for President. Trump has repeatedly attacked Ford over its plans to invest in a new plant in Mexico and in several speeches has said it wouldn’t happen if he were president.

Ford CEO Mark Fields said last month in New York Ford is a global company that invests in markets around the world. However, overall Ford’s efforts to correct the record have been relatively ineffective in the face of attacks from Trump.

The largest chunk of the new investment, $1.4 billion, will be at the company’s Livonia Transmission Plant in suburban Detroit, which employs and is scheduled to begin building a new 10-speed transmission this summer. The plant currently has 1,550 employees.

Ford said another $200 million will be spent at at Ohio Assembly Plant near Cleveland, Ohio, which employs 1,650 people, who began building F-350, F-450 and F-550 Super Duty chassis cab configurations earlier this year as Ford expanded its commercial business.

(UAW scores organizing with at Ford supplier in Ohio. For more, Click Here.)

The Ohio assembly plant also produces the Ford F-650 and F-750, which were moved to the U.S. from Mexico last year as well as a Ford E-Series cutaway vans and stripped chassis.

Ford said the investment in Michigan and Ohio are part of a $9 billion commitment the company made in the 2015 UAW-Ford collective bargaining agreement to continue investing in its U.S. plants. The automaker notes it has invested $12 billion in its U.S. plants and created a total of nearly 28,000 U.S. jobs in the past five years.

“We are proud that Ford employs more hourly workers and builds more vehicles in the United States than any other automaker,” said Joe Hinrichs, Ford president, The Americas. “We are committed to manufacturing in the United States, as we have been for more than 100 years.”

(Click Here to see details about Ford swapping range for price on the new Focus EV.)

Ford’s latest investment creates or retains 500 hourly jobs in Michigan to build the aforementioned 10-speed transmission to be first introduced in the all-new F-150 Raptor and certain F-150 models. The investment and 150 hourly jobs at Ohio Assembly Plant, located in Avon Lake, will be used to build Super Duty chassis cab.

Ford has committed to 2,800 U.S. jobs in the past five months, and to a total of 8,500 hourly jobs in the U.S. during the next four years in communities across Michigan, Illinois, Kentucky, Missouri, New York and Ohio, Hinrichs said.

“I am thrilled that through our collective bargaining with Ford we were able to secure a substantial investment for the communities of Southeast Michigan and Northeast Ohio,” said Jimmy Settles, UAW vice president, National Ford Department.

“The men and women of both Livonia Transmission and Ohio Assembly have shown a great commitment to manufacturing quality products, and we look forward to their continued success.”