Dubai Pushing For Autonomous Transportation by 2030

City looks to save billions of dollars through self-driving transportation. 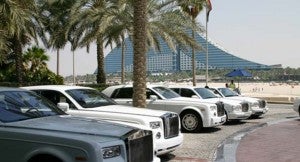 Just your typical parking lot in Dubai ... now. However, by 2030, a quarter of all transportation is expected to be autonomous.

Initiatives or promotions involving self-driving vehicles continue to proliferate around the globe. Volvo, for example, is embarking on a test of self-driving vehicles in London, while the Beijing Auto Show, which was virtually surrounded by the city’s infamous traffic congestion, also sparked talk of the China’s desire for autonomous vehicles to help mitigate the problem.

Sheikh Mohammad Bin Rashid Al Maktoum, vice president and prime minister of the UAE and ruler of Dubai, announced the launch of a strategy to bring “smart, self-driving transport” into the city.

The goal is to make 25% of all transportation trips in Dubai smart and driverless by 2030.

The plan will be a joint venture between the Roads and Transport Authority and Dubai Future Foundation with the strategy focusing on individuals, technology, policies and legislation and infrastructure.

When implemented, this strategy is expected to reduce transportation costs by 44%, or $408 million, through the reduction of environmental pollution and another $7.4 billion through the increasing efficiency of the transport sector by 20%.

“We believe this commitment to outlining a growth path for the implementation of autonomous vehicle technology, coupled with Dubai’s Smart City initiative, will support our view that Dubai will provide the biggest opportunities for connected car technology in the United Arab Emirates,” according to the official announcement in Dubai.

The introduction of driverless technology will be driven by the positive outlook for both vehicle and 3G/4G phone ownership during the forecast period 2016-2020 in the UAE, where officials forecast car ownership to reach 173.4 vehicles per 1,000 people by 2020, which represents growth of 7.7% on 2015 levels.

“We believe that as Dubai continues to encourage investment into connected car and autonomous vehicle technology, it will move itself closer and closer to its target of being a global smart city over the next 10-15 years. As part of the opening of the second day of the MENA Transport Congress and Exhibition, the government announced the commencement of a trial run of a fleet of small autonomous vehicles,” noted a report by the consulting firm of BMI.

The 10-seat driverless vehicles, produced by French autonomous vehicle manufacturer EasyMile and Emirati partner Omnix, were used to transport exhibitors on pre-programmed routes. The exhibition of the prototypes was expected encourage further research and development into the driverless vehicle field and help attract top talent, putting Dubai at an advantage when compared to other cities in the UAE, according to officials in Dubai.

Mattar Al Tayer, director-general and chairman of the Board of Directors of Roads and Transport Authority, confirmed that the adoption of the strategy to move towards a self-driving future by 2030 is a very important step in Dubai’s future. Al Tayer said that smart vehicles powered by electricity will significantly contribute to raising the level of traffic safety and reducing carbon emissions.

“It contributes towards the rationalization of fuel consumption, and contributes to the use of smart vehicles in improving smart mobility hub, which in turn contributes to transforming Dubai into a smart city,” Al Tayer said in an interview with Khaalej Times.

Al Tayer pointed out that a competent team or commission has been formed in the RTA to examine the use of smart vehicles and to draw out an action plan to keep up with the latest developments in this field.

“The team will also determine the specifications and standards required for these vehicles as well as infrastructure and safety legislation necessary,” he said.