Terrorists Could Use Autonomous Vehicles as Car Bombs

Hackers could find numerous ways to disrupt a target. 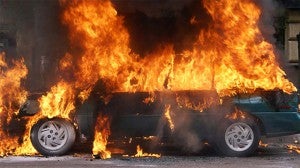 Terror groups like ISIS and the Taliban have made car bombs one of their favorite weapons.

Just this week, car bombs have left dozens dead in Turkey, Iraq and Germany, and the problem could become even worse if terrorists get their hands on autonomous vehicles, a cyber-security expert warned during the South-by-Southwest conference in Austin, Texas.

Autonomous vehicle advocates contend the technology could save thousands of lives a year by preventing the sort of driver errors responsible for over 90% of all fatal crashes in the U.S. But as far back as 2014, an FBI report raised flags about the potential dark side of self-driving technology.

“We have concrete evidence they’re building cars that drive themselves,” Mikko Hypponen, the chief research officer of F-Secure, said during a presentation at the SXSW conference, referring to the self-proclaimed Islamic State, or ISIS. “It’s obviously a deep concern, because you are looking at safety vulnerabilities that could be exposed.”

Autonomous vehicle technology is rapidly moving from the realm of science fiction to everyday reality. Tesla recently launched a system called AutoPilot that allows a vehicle like its Model S sedan to drive hands-free on limited-access highways. Nissan has promised to put its first fully autonomous vehicle into production by 2020. 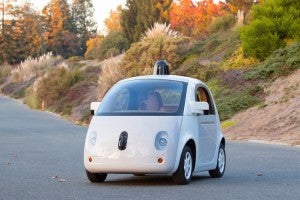 Security experts worry autonomous vehicles like this Google prototype could become a target for both hackers and terrorists.

While proponents see tremendous, life-saving opportunities, skeptics point to a variety of potential problems. Mark Rosekind, the head of the National Highway Traffic Safety Administration, and an opponent advocate of self-driving technology, has also raised a flag over the potential for hackers to take on increasingly computer-driven vehicles.

While there are no reports of vehicles being hacked, potential vulnerabilities have led BMW, Fiat Chrysler and Nissan to order recalls over the last 12 months. The Japanese maker just this past month shut off its NissanConnect smartphone app because it could give a hacker access to software controlling the Leaf battery-electric vehicle.

One concern is that as fully driverless vehicles – such as those envisioned by tech giant and autonomous vehicle research leader Google – roll out, hackers could take control, perhaps to capture passengers for ransom or worse.

But the threat of using autonomous vehicles for mobile bomb delivery takes things a step further. The scenario was first touched on in a report produced by the FBI’s Strategic Issues Group in 2014. It warned the technology could have “a high impact on transforming what both law enforcement and its adversaries can operationally do with a car.”

According to Hypponen, ISIS is the terrorist group best positioned to make use of the technology. It has already proved adept at using the Internet to reach its followers and recruit new members. Recent reports by those following ISIS indicate the group has attracted hundreds of well-trained software programmers.

Among other things, the Finnish cyber-security expert claimed, the group is “building mannequins to put behind the driver’s seat, and (has) built a system to clone the heat system of a human being so it looks like a human’s driving.”

The increased threat that comes with autonomous technology coincides with the increasing problems of cybersecurity, said Hypponen, who has worked in the field for 25 years. “When I entered this field, the hackers had no real motive – they were doing it because they could.” Now, however, many hackers have clear criminal intent, while others are driven by political ideology.

Using autonomous vehicles to carry bombs isn’t the only way the technology could be used to disrupt a target like the U.S., experts are warning.

“If you wanted to slow US GDP, all you would have to do is increase the commute time in every urban environment by 15 minutes. Just tweak a few cars, or get one to put on the brake … even if these things happen a few times, it will affect the confidence of consumers.” Jonathan Matus, CEO of the company behind the Zendrive app, told the British newspaper the Guardian.

How to prevent such problems is unclear. Chinese authorities in the city of Shenzhen have begun a test program in which they will assign tracking IDs to 200,000 vehicles operating in the city. If the project works it could be rolled out nationwide. Similar steps may be needed to track autonomous vehicles, experts say, though it’s unclear that will go far enough – or pass muster with privacy advocates.