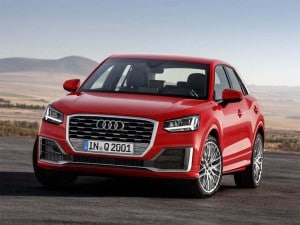 Audi is ready to take on Mercedes-Benz, BMW and other players in the compact utility segment with the new Q2.

Here’s a riddle: how do you get bigger and smaller at the same time? Hint: it doesn’t involve any of the pills Alice took in Wonderland. The secret? Just ask Audi which is expanding its line of SUVs with the addition of its smallest model yet, the new Q2 making its debut at the Geneva Motor Show.

Audi still has a long way to go to catch up with either Mercedes-Benz or BMW, two German rivals that have yet larger fleets of SUV models, but the arrival of the Q2 plants the Audi flag in the middle of one of the global luxury markets fastest-growing segments, small crossovers. The Audi Q2 will take direct aim at the Mercedes-Benz GLA, one of that maker’s most successful products in recent years.

The Audi Q2 is the first major product to come to market that was helmed by Marc Lichte, the design chief brought onboard in 2013. But according to one report, the Q2 came about almost by accident, a very early sketch by a junior designer just happening to catch the eye of an Audi board member who quickly convinced the rest of his colleagues that it had to be a part of the brand’s line-up.

A key challenge was making sure that the Q2 wouldn’t be confused for the with the A3 sedan or Allroad wagon, even though they all share the same modular platform – known internally as the MQB. 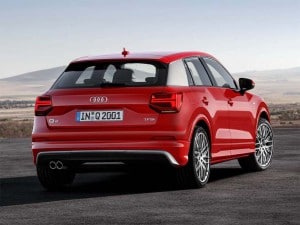 As Audi’s alphanumeric nomenclature would suggest, the Q2 is the smallest of that bunch of downsized models. It measures just 13.7 feet, nose-to-tail, weighing in at 2,657 pounds.

And though the Audi Q2 will have the Quattro all-wheel-drive system available on higher-end models, the basic version of the ute is front-drive. That fits the way the maker plans to position the new ute, more than anything as a sort of Milennial urban lifestyle vehicle. With less than 8 inches ground clearance, this is not a vehicle Audi expects to see going off road very often except, perhaps, on some old cobblestoned streets or down a rutted alleyway.

That said, Audi will be loading the Q2 up with a healthy mix of safety, comfort and infotainment technologies. And to master much of that it will use a 12.3-inch “Virtual Cockpit” screen, a smaller display above the center stack, and the familiar Audi MMI rotary controller take command of most of those systems and replace traditional gauges.

There’ll be navigation, of course, Apple CarPlay, Android Auto and more. On the safety side, buyers will have a mix of standard and optional features such as blind-spot detection, lane-change monitoring, automatic emergency braking, and even a system that warns a driver entering a possible speed zone. 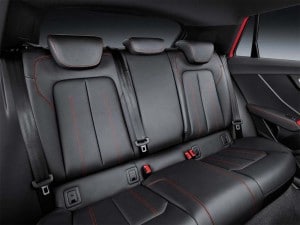 The new Audi Q2 is being pitched as a five-seater ... that might be a stretch

The new Audi Q2 is being pitched as a five-seater. That might be a stretch when it comes to fitting three in the back, but fold the seats down and it’s an urban tool with more than 37 cubic feet of cargo space.

Power will come from a choice of six different engines, quite a portfolio in a segment where most competitors are happy to get by with one or two alternatives. The base engine is a 1.0-liter three-cylinder gas package, with 1.4- and 2.0-liter upgrades available. There will be three different diesels, meanwhile. Two transmissions are also on the list: a six-speed manual and a seven-speed dual-clutch.

If all this resonates, just make sure you’ve got a place to park your new Audi Q2 in Europe. For the moment, that’s the only place it will be offered. And that comes as a bit of a surprise considering the growing demand for pint-sized crossover in other parts of the world, even the U.S., where Mercedes is scoring handily with the GLA.

Perhaps Audi will take another look at the North American numbers during the next couple years, though by then it will likely be facing a lot more competition in this fast-growing segment.