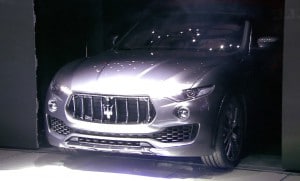 Maserati introduced its much-delayed and first-ever SUV, the Levante, at the Geneva Motor Show.

It’s been a long time in coming – a dozen years since we got our first look at the oddly named Maserati Kubang concept. It’s finally back in production form, making its debut as the only slightly less curious Maserati Levante.

The Levante becomes the first SUV in the Italian maker’s long history, and the latest addition to a growing line-up of luxury utes that will eventually include offerings from high-line brands as diverse as Aston Martin, Ferrari, Rolls-Royce and Bentley, the latter just rolling out its first off-roader, the Bentayga.

Originally intended to be little more than a gussied-up Jeep Grand Cherokee, the new Maserati Levante is “100% Maserati,” instead relying on a heavily modified version of the brand’s latest platform which also serves as the foundation for the Ghibli and Quattroporte sedans. The one exception is the top-line engine that will have its origin in the Ferrari plant not far from Maserati’s own assembly line.

The production version of the Maserati Levante is making its first appearance at the 2016 Geneva Motor Show, officials from Maserati and parent Fiat Chrysler Automobiles unveiling it in high form, even borrowing a few words from poet Maya Angelou.

From his own viewpoint, Maserati CEO Harald Wester suggested, “It brings something new and dynamic to a fading, tired and stale environment. Levante,” he added in a conversation with reporters, “is a free spirit. It stimulates change.” 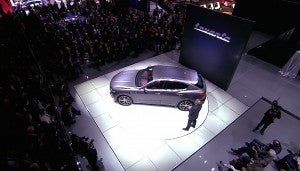 Harald Wester stands beside the new Levante after its introduction in Geneva.

It’s going to need to, at least for Maserati. The maker suffered some setbacks on the sales side in 2015 after several years of growth. The Italian maker is counting on the new ute to get things back on track. No surprise.

From entry-level models like the Lincoln MKC to big bruisers like the Levante and the Bentley Bentayga, sport-utility vehicles have become the fastest-growing segment of the luxury automotive market. Global demand has surged 40% over the last five years.

Maserati is hoping to hit global sales of 75,000 by 2018, a big jump after the 10% dip last year. If trends hold – and reviews are positive – the Levante could soon become Maserati’s biggest seller.

When the SUV reaches showrooms later this year, the “base” model will start at $76,000, about $21,000 more than the starting price for a similarly sized BMW X5 Sport-Activity Vehicle. The Levante, however, will get a standard, twin-turbo 3.0-liter V-6. Globally, that engine will be offered in two versions, one making 350 horsepower, the other 430.

Maserati is expected to take on the high-performance niche with another powertrain that will be borrowed from the Ferrari toolchest.

Recognizing the strong diesel market in Europe, especially in the luxury segment, Maserati also plans a 275-hp turbodiesel. That 3.0-liter package will manage 0 to 60 in 6.9 seconds, the maker claims.

In terms of ride and handling, all versions of the Maserati Levante will feature a driver controllable suspension with electronic damping and air springs. The three engine options coming at launch will use a ZF eight-speed gearbox and drive all four wheels.

The chassis, the maker says, “is designed to combine the outstanding on-road performance typical of every Maserati with unrivalled handling even on very low-grip surfaces and an excellent off-road performance and ride.”

Visually, it’s not hard to see the family pedigree, starting with the familiar portholes drilled into the front fenders, as well as the waterfall grille framing the Maserati trident logo. The Levante also shares the brand’s iconic shark-gill air vents up front – three of them, in fact.

One distinctive touch picked up since the reveal of the original Kubang concept: the production Levante features distinctive split front lighting, the narrowly tapered upper lamps framing the upper grille, the foglamps riding just above the lower radiator.

The Maserati Levante has more in common with a Quattroporte than the classic, Spartan SUV of years past. The show car in Geneva featured one of the model’s more pricey options, silk seating and door trim sourced from fashion house Zegna.

Buyers in Europe will see the Maserati Levante in showrooms by May. North American customers will have to wait until September.