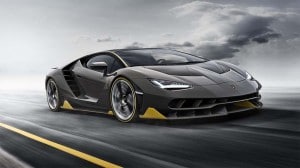 How do you celebrate the centennial of your founder? You could throw a party and put plenty of candles on the cake. But Lamborghini has a different way of celebrating the 100th birthday of founder Ferruccio Lamborghini at this year’s Geneva Motor Show.

The Italian maker is showing off the long-rumored Lamborghini Centenario, a super-exclusive, 770-horsepower version of its top-line Aventador two-seater. For those looking to crash the party, Lambo officials told a media audience they plan to produce just 40 of the hypercars: 20 coupes and 20 roadsters.

Suggesting the one-off model allows his company to “transcend some of the constraints” of regular series production, outgoing Lamborghini CEO Stephan Winkelmann said, “The Centenario is a car that perfectly combines tradition and innovation. It looks to the future while honoring the legend that is Ferruccio Lamborghini.”

At $1.9 million, the price of admission to Ferruccio’s party is steep. What do you get for the money? 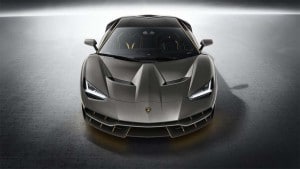 By American standards, the Centenario will "only" make 760 horsepower.

But the Lamborghini Centenario is about more than just straight line acceleration. Like almost everything Lambo has built, power goes to all four wheels to maximize grip. And the Centenario’s spaceship styling is meant to do more than impress. It’s all about reduced drag and lift. Among other thing, it features an active rear wing that extends at higher speeds to increase downforce.

The Centenario introduces rear-wheel steering, a concept that has been showing up on top-line competitors such as Porsche and Ferrari lately.

(Is the DB11 really the “most important car ever for Aston Martin? Click Here to find out.) 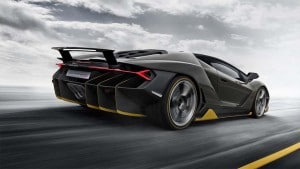 The angle most of will see.

Both the body and monocoque are made entirely of ultra-strong carbon fiber. That both increases stiffness and reduces mass, the Lamborghini Centenario weighing in at just 3,344 pounds.

If you look closely, you’ll spot the familial resemblance to the Lambo Aventador, notably in the form of the scissor doors found on V-12 models -but the Centenario makes that “mass market” offerings seem almost tame by comparison.

Done up in gloss carbon fiber, key design elements are functional. That includes the seemingly countless number of air vents used for breathing and cooling, as well as to further aero flow. The unusual rear wheel arches — which envelop specially developed Pirelli PZero tires – are one of the signature design features of the new Lamborghini Centenario.

Inside, the Centenario balances performance and luxury with features such as lightweight carbon fiber sport seats and door panels of carbon fiber and Alcantara trim. 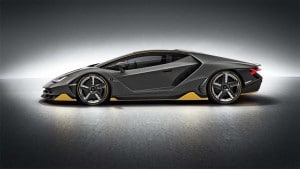 There’s a 10.1-inch touchscreen to handle infotainment duties and, among other things, it features Apple CarPlay and the ability to access the Internet. There’s also a built-in telemetry system, Lambo notes, wich, “allows speeds, times, lateral and G forces to be recorded and even compared between different occasions and different drivers. Two optional interior cameras allow the drivers’ experiences to be recorded.”

Oh, and since you’re likely never to experience the full extent of the Lamborghini Centenario’s capabilities except on track, there’s space specifically reserved for two helmets in the front cargo compartment.

The Centenario is the latest in a series of limited-edition models, such as the Aventador J and the Reventon, to come from Lamborghini in recent years. And the maker suggests that unlike most automotive purchases there may be logic to the big investment, as those models have all gained significant value since their introduction.

So, if you can come up with enough cash, think of it as a reasonably safe alternative to the current, highly volatile stock market, perhaps.