Key Scion Models Live On as Toyotas – But Get New Names 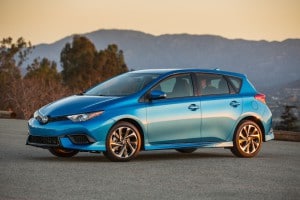 The 2016 Scion iM will be renamed the Toyota Corolla iM when it enters the maker's mainstream line-up.

Scion may be gone, but three of its models will live on – under new names, parent Toyota Motor Co. has announced.

Hoping to give them a bit more appeal, products like the Scion FR-S sports car and iM hatchback will be rebadged using names more familiar to Toyota buyers in the U.S. and abroad.

Some of the models are also expected to undergo some minor cosmetic updates when they are reborn as Toyotas over the summer.

Launched in 2003, Scion was an immediate hit with quirky products like the boxy xB attracting a new generation of young buyers who weren’t visiting Toyota showrooms. But after hitting a sales peak of 173,034 vehicles in 2006, Scion’s fortunes rapidly spiraled downward. Last year, volume dipped to just 56,167 despite the addition of several new models.

(After a slight detour, the Toyota C-HR finally makes its debut. For more, Click Here.)

With little sense things could be turned around, Toyota scrubbed plans to give Scion its first SUV and decided to pull the plug on the brand. It will officially go out of business over the coming summer.

Some of Scion’s weakest models will go away. The failed, second-generation xB is already gone, and the tC coupe will follow. But other products showing potential will live on.

The compact crossover that was to have been unveiled as a Scion at the Detroit Auto Show last January was, instead, unveiled at the Geneva Motor Show this month, rebadged as the Toyota C-HR. Other changes planned for Scion products:

(Click Here for details about the rationale behind dumping Scion.)

Like the Scion iM, the FR-S was not actually produced by Toyota. It was the result of a joint venture between the parent company and little Subaru which marketed an all but identical version of its own, the BRZ.

There has been talk of a more powerful version of the sports car, but no word on a performance model yet.

That said, the Toyota 86 will get more than just a new badge. It also will get a wider front air intake, a restyle rear bumper and some interior upgrades, including a steering wheel that now has built-in audio controls.