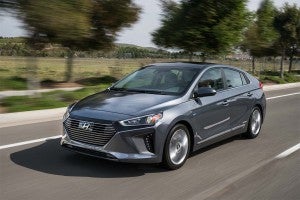 Hyundai's Ioniq hybrid, which made its world debut in Geneva, bowed before a U.S. audience at the New York Auto Show.

Introduced to the world at last month’s Geneva Motor Show, Hyundai’s Ioniq hybrid bowed on U.S. shores at the New York International Auto Show further cementing the company’s plans to take on the Toyota Prius in a battle for hybrid supremacy.

Hyundai calls its new hybrid an “eco-focused vehicle” and claims it is the first in the world to offer three distinct electrified powertrains on a single, dedicated vehicle platform.

“With outstanding powertrain flexibility, design, connectivity, and advanced technologies, Ioniq meets the needs of a large and growing group of buyers needing a highly efficient, low-emissions vehicle without compromise to their daily lifestyles.”

(Hyundai Ioniq – from low to no emissions. For more, Click Here.) 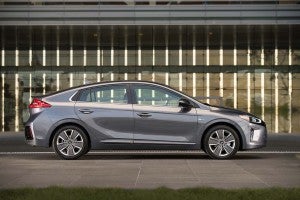 Hyundai buyers will have three different options to choose from:

The driving experience inside Ioniq is enhanced through state-of-the art connectivity features like Apple CarPlay and Android Auto, as well as wireless charging of smartphones. Even more, the 7-inch TFT instrument cluster displays all key driver information with outstanding resolution.

The vehicle’s interior not only is laden with new technology, but also with green materials aimed at expanding the vehicles claims to environmental friendliness. The interior door covers are made of plastic combined with powdered wood and volcanic stone while providing the same quality appearance of typical plastic-based materials.

The softer, more natural feel is achieved along with less reliance on oil-based products. This approach extends to other areas of the car as well. Raw materials extracted from sugar cane are partly applied on the headliner and carpet. Paint with renewable ingredients extracted from soybean oil is used to achieve lustrous metallic colors on key components.

Hyundai claims the Ioniq has one of the best aerodynamic designs on the market, with a drag coefficient of just 0.24. It has also targeted mass by using lightweight materials such aluminum for the hood and tailgate.

As for the longer-term Project Ioniq, “The future mobility lifestyles that we envisage is about staying connected to our daily lives all the time without being bound by the limitations of time and space,” said Euisun Chung, vice chairman of Hyundai Motor, during the vehicle’s Geneva debut. “We are determined to make this a reality so that everyone can enjoy better, more fulfilling lives.”

(To see more about the new Porsche Macan, Click Here.)

Chung said the carmaker will focus on three main areas: predicting changes in future mobility; creating new types of mobility to adapt to changing social needs and desires; and creating “new service models and mobility experiences that extend the role and definition of ‘cars.’”