Volkswagen CEO Matthias Mueller has been trying to contain the diesel scandal.

German prosecutors have now put 17 people under investigation as they widen their probe of Volkswagen’s diesel emissions cheating scandal.

The number has grown in recent weeks from the initial six employees prosecutors say they were targeting – and now goes well beyond the “handful of engineers” VW’s senior executives have long said were behind the cheating.

Separately, VW CEO Matthias Mueller on Tuesday said he expects the scandal to result in “substantial and painful” financial damage before it is fully resolved. The maker has already set aside more than $7 billion to cover those costs while also setting up a credit line for as much as $20 billion more.

As “part of the diesel investigation, the number of suspects has risen,” Braunschweig prosecutor Klaus Ziehe said Tuesday. But while recent reports in the German media have suggested that former VW CEO Martin Winterkorn was told about the cheating more than a year before it was publicly revealed, the prosecutor said that among the 17 people being investigated, “none are from the management board.”

The scandal was touched off last September when the U.S. Environmental Protection Agency accused the automaker of using a so-called “defeat device,” software designed to detect when a vehicle using the maker’s 2.0-liter turbodiesel was undergoing emissions tests. Under such a circumstance, the vehicle would then sharply reduce its emissions of smog-causing oxides of nitrogen.

A federal judge has given till March 24 to come up with a diesel fix for VW and Audi models.

VW quickly confirmed the allegations and later acknowledged the cheating extended to a larger turbodiesel used by not only the Volkswagen but Audi and Porsche brands, as well. All told, about 11 million vehicles sold worldwide were equipped with the illegal software.

(Unions ratchet up pressure on VW. Click Here to see what they’re seeking.)

Since then, VW has begun fixing vehicles sold in much of the world, but it has yet to come up with a repair for the U.S. market that can win approval of federal regulators. A U.S. district judge in San Francisco has given the maker until March 24 to come up with an acceptable fix.

VW has, meanwhile, been hit with more than 500 lawsuits consolidated before that federal court. Most have been filed by owners of VW vehicles. But the U.S. Justice Department has also filed a civil suit against VW that could result in more than $40 billion in fines.

The Justice Department has launched its own criminal probe, though it has yet to detail the progress of that investigation. Similar probes are underway in several other countries. 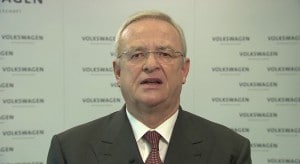 Despite concerns he knew about the scandal for some time, former CEO Martin Winterkorn is not under investigation in Germany.

Based near VW headquarters in Wolfsburg, prosecutors in Braunschweig have reportedly taken a lead in much of the investigative work. They launched their effort shortly after the cheating was announced last September and have been looking to find out who was responsible for the fraud.

Senior management at the automaker has attempted to portray the case as one of a “handful” of rogue engineers trying to cover up their inability to meet Volkswagen’s aggressive plans for its diesel line-up. The maker hoped to gain a commanding lead in the segment by marketing engines that were not only fuel-efficient but clean and quick.

In the U.S. market, those engines accounted for about a quarter of the VW brand’s sales prior to last September. For now, however, neither VW, Porsche nor Audi can market any of those “oil-burners.” That has resulted in a sharp decline in sales for the Volkswagen brand despite hefty incentives on the rest of the marque’s line-up.

It is likely the scandal will keep VW management busy “for a long time,” said CEO Mueller on Tuesday.