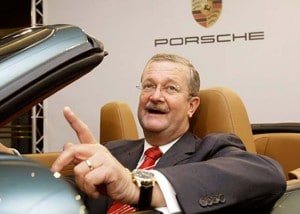 Former Porsche CEO Wendekin Wiedeking was one of two former execs acquitted by a German court.

A regional court Germany acquitted two former executives of Porsche AG on charges of stock manipulation during a failed 2008 attempt to take over the much larger Volkswagen.

A regional judge in Porsche’s hometown of Stuttgart, dismissed the stock manipulation charges leveled by prosecutors against Porsche’s Chief Executive Officer Wendelin Wiedeking, who in 2008 was considered a rising star in the global auto industry, and Porsche’s chief financial officer Holger Härter, who was one of the principal architects of the abortive bid for Volkswagen.

The takeover attempt collapsed amid a swirl of lawsuits and led to the ouster of Wiedeking and Härter.

Wiedeking and Härter were indicted on stock manipulation charges by the regional court in Stuttgart. The charges of market manipulation in connection with an attempted takeover of Volkswagen in 2008, ending what had become an embarrassing chapter in the history of both Porsche and Volkswagen.

A lawsuit filed by a group of New York hedge funds that claimed they lost more than $2 billion on speculations based on Porsche’s takeover attempt also has been dismissed. Ultimately, Volkswagen, in a display of power by the ruling Piech family, took over Porsche and made it part of the Volkswagen Group.

Echoes of the original stock manipulation scandal continue to reverberate in the new scandal involving Volkswagen’s cheating on the emission tests in the U.S. Porsche, right along with Volkswagen and Audi, has been barred from selling vehicles equipped with diesel engines the U.S. for the foreseeable future and also faces punitive fines.

Prior to Friday’s verdict, prosecutors in the case urged the court to sentence both Wiedeking and Härter to more than two years in prison for manipulating the market and misleading the public involving the foiled takeover.

The prosecution also accused Porsche managers of intentionally concealing their plans to raise the company’s stake in VW from investors and regulators.

(Click Here to see how Porsche looked to the past for the new 718.)

On Oct. 26, 2008, carmaker Porsche announced that it owned 42.6% of VW’s common stock and had acquired options for another 31.5% that would bring its total stake in the company to 74.1%. The company said it was seeking to obtain 75% of VW shares. The announcement resulted in a frenzy of share trading activity.

The shock announcement drove VW’s stock price up from 290 euros to 1,005 euros per share almost overnight, making it the world’s most valuable company for a short period of time. The takeover effort collapse a few weeks later.

The indictment of Wiedeking and Härter followed a three-year investigation that concluded Porsche misled investors prior to the attempted takeover.

(To see more about the 911 R paying homage to its racing heritage, Click Here.)

The prosecutors built the case around repeated public comments by Porsche that the sports car maker was not intending to acquire the bigger maker. At the same time Porsche’s the prosecution presented evidence the defendants had begun increasing their stake in VW back in 2008, misleading other investors about their true intentions.