Catching up to a shifting market. 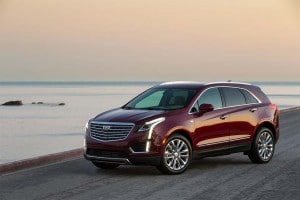 The 2017 Cadillac XT5 replaces the old SRX. It will be joined by 3 other new Caddy CUVs.

A lot has changed over the last 17 years. When Cadillac launched the original Escalade, the idea of a luxury SUV seemed something of an oxymoron. Five years later, Caddy was again at the cutting edge with the debut of its car-based crossover-utility vehicle, the SRX.

Today, however, utility vehicles — whether car-based or classic “truck-trucks” — rule the road, both in the mainstream and the luxury market. And, if anything, Cadillac has fallen behind competitors like Mercedes-Benz and BMW. The Detroit maker plans to launch four new CUVs by the end of the decade, starting with the Cadillac XT5, the new replacement for the aging SRX.

To get a sense of what Caddy’s delivered, we headed for the hills – the mountainous terrain east of San Diego, where we had a chance to check out both the luxurious side of the new Cadillac XT5 as well as to see how it handled some seriously aggressive driving maneuvers.

(Cadillac shifts focus to China and beyond. Click Here for the story.)

With a base price of $38,995, plus $995 for delivery fees, the 2017 Cadillac XT5 is more than just an update of the old SRX. It starts out with an all-new architecture. Known inside GM as “Chi,” it’s shared with several other midsize General Motors crossovers, such as the Buick Enclave. But GM hasn’t fallen back to the bad old days of so-called badge engineering. For the XT5, the Chi platform has undergone a number of significant revisions meant to enhance both its sportiness and its comfort. 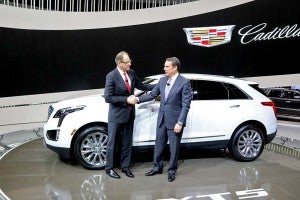 Visually, you can spot some of the similarities to the old SRX, but the XT5 takes Cadillac’s Art & Science design language in a new direction. As with the brand’s recently launched flagship, the CT6 sedan, it is not nearly as edgy as earlier Cadillac models. In designer lingo, there’s a more sculptural look, with fewer hard edges and creases.

At the same time, the design team has put more emphasis on signature Cadillac styling cues, notably the large vertical LED head and taillights that make it easy to know what badge it wears from a good distance away. The XT5 also adopts a bolder take on the familiar Caddy grille than on the old SRX.

Inside, the new crossover echoes the CT6 sedan, amping up Cadillac’s effort to deliver a truly luxurious experience. Here is where the design team has made a major shift in direction. Where the SRX divided the instrument panel up into vertical segments, anchored by a tall center stack, the XT5 adopts a more symmetrical, horizontal layout that emphasizes the added width of the new model. 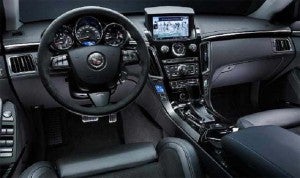 The XT5 gets a more refined interior with an updated Caddy Cue on a pop-up screen.

(Click Here for a review of the new Cadillac CT6 sedan.)

There is, of course, the requisite touchscreen display that manages all manner of techno-features, including new Apple CarPlay and Android Auto features, as well as the now standard Cadillac Cue infotainment system.

Cue took a drubbing when it was first introduced. It was slow and difficult to operate. More processing power and an improved touch – and voice – interface helps. There’s still an iPhone-like virtual slider to control volume, rather than a knob, but it is clearly easier to use than with earlier Cue iterations.

The XT5 offers a wide range of new technologies, including a rearview mirror that actually is a videoscreen, using a wider image provided by a rear-mounted camera. It proves particularly useful if you’ve got a car full of passengers and cargo that might otherwise obstruct your view.

Caddy is offering two levels of active safety systems, a base package that includes such features as active cruise control and forward collision warning, and a more advanced package that adds such things as automatic emergency braking. To be honest, we’d like to see many of those features added as standard gear, something likely to happen over the next few years across the industry. 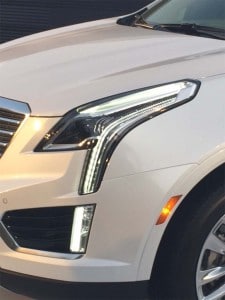 While technology has become, for many buyers, the new definition of luxury, Cadillac hasn’t forgotten the more traditional meaning. There’s a lot more attention to detail, such as the hand-stitched leather, the optional, open pore woods, and the galvanized metal trim.

There’s a grand sense of spaciousness to the 2017 Cadillac XT5 that you didn’t get with the old SRX. It helps that the wheelbase has been stretched two inches, most of that being given to the cabin. (There’s three more inches of rear legroom, for example.) There are other subtle steps that improve both roominess and utility. By adopting a new electronic shifter, Caddy opened up space below for a purse-sized storage bin, for example.

One surprise with the XT5 was the lack of powertrain options. The new CT6, for example, offers three gas engines, with a plug-in hybrid and, eventually, a high-performance V-8 set to follow. The XT5, on the other hand, foregoes some of our favored Cadillac engine alternatives to stick with the marque’s naturally aspirated 3.6-liter V-6. For now, it’s the only acceptable option that will fit the transverse engine layout, we were told.

Making 310 horsepower and 271 pound-feet of torque, it’s by no means a bad choice. It helps that GM engineers put an emphasis on “lightweighting,” a new mantra that translates into less mass to lug – or flog – around. The XT5 is a full 650 pounds lighter than the similarly sized Mercedes GLE and still lighter than the smaller Audi Q5.

That said, the 3.6-liter V-6 is not the most exciting engine, especially as you climb higher into the Palomar Mountains. That’s where the better-breathing turbos available in the CT6 really shine. 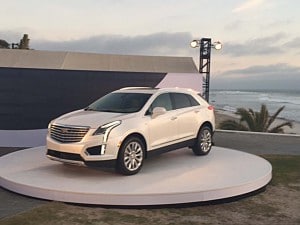 The XT5 goes up against imports like the Mercedes GLE and Lexus RX, as well as Lincoln's latest MKX.

The 2017 Cadillac XT5 can be ordered in both front and all-wheel-drive configurations. The product development team did a notably good job of minimizing the push you often feel taking an AWD model into a hard corner. Credit a system that’s designed to rapidly shift torque wherever it’s needed. It’s capable of delivering up to 100% of the available torque to any individual wheel.

That said, the XT5 will quickly remind you that it is, in effect, a tall wagon. We had the chance to drive many of the same roads only a month earlier in the new Cadillac CT6 and the difference in handling was memorable. Despite its size, the premium sedan was unexpectedly nimble. The XT5 doesn’t plod, but you’re not going to take it out specifically to see how fast you can fly through the corners. A bit more feedback from the steering system would be one request we’d make of Cadillac engineers.

While the 2017 Cadillac XT5 doesn’t emphasize the “sport” in sport-utility vehicle, it provides a solid and delightfully comfortable ride under less aggressive driving conditions. Overall, it does what we expect the vast majority of potential buyers are likely to expect.

And that’s critical. While it was far from the king of the midsize crossover segment, the old SRX was Cadillac’s best-selling nameplate. And considering where the market is going, there’ll be even more buyers looking to see how it stacks up in the coming years.

Cadillac could use those other utes to flesh out its line-up, but while it waits the 2017 XT5 is a good place to start. We’d definitely recommend putting it on your shopping list if you’re looking for a well-executed midsize luxury crossover.