The new sedan expected in U.S. later this year. 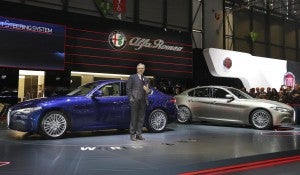 The long-awaited expansion of Alfa Romeo’s Giulia line-up beyond the Quadrifoglio is finally here as the rest of the family, albeit a little toned down, bowed at the Geneva Motor Show.

The Quadrifoglio is the brand’s high-end, high-performance sedan in the group, replete with big vents, spoiler and other aggressive-looking add-ons. However, the three-car group also includes the Giulia and the Super to go with the performance beast.

The other two get simpler, more conservative versions of the exterior, and a choice of less powerful engines. The Quadrifoglio is powered by 2.9-liter twin-turbo V6 putting out 505 horsepower. The 2.0-liter V6 also available produces a very respectable 276 hp.

Europe, of course, gets a diesel option: a 2.2-liter with 150 or 180 hp; however, that option isn’t going to be made available in the U.S., officials said. The engines are available in a six-speed manual or eight-speed automatic.

The Giulia is designed – regardless of what’s under the hood – to be a driver’s car, at least according to FCA.

“Everything is clean, essential and pivots around the driver, like the controls grouped on the small, direct steering wheel designed to adapt to all driving styles,” Alfa said.

“And more. The driver’s position was ‘cut’ like a fabric with a diagonal tunnel, a slightly undulated dashboard and cleverly oriented instruments which convey the impression of a tailor-made suit with hand-crafted care and premium materials chosen for their visual and tactile pleasantness and assembled to make the human touch visible.”

Essentially, it’s a flowery way of saying that the gauges and other controls are easy-to-read and just as easy to touch, especially with the 8.8-inch touch screen available in the new Giulia.

While a decked out Quadrifoglio will cost about $70,000, the base Giulia and upgraded Super can be had for less and the starting package is actually pretty impressive.

Equipment on the new entry-level “Giulia” is rather generous including, as standard, new and efficient active safety systems such as the Forward Collision Warning with Autonomous Emergency Brake and pedestrian detection, Integrated Brake System, Lane Departure Warning and cruise control with speed limiter.

The Giulia can be ordered in Europe starting in early spring and it should start showing up in U.S. showrooms sometime this year, according to the company’s previously revealed plans, perhaps even as early as late spring or early summer.