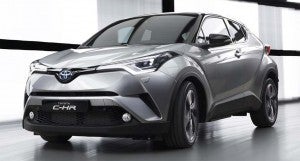 Toyota? Scion? With the upcoming demise of the Scion brand, the subcompact will carry the mother brand's badge.

Not many vehicles have seen so many detours even before being put into production, but at least the new C-HR concept has finally found a home.

The compact crossover has bounced and forth across the Atlantic several times since making its debut at the 2014 Paris Motor Show. And it was finally expected to make its appearance in production trim at the Detroit Auto Show earlier this year. The one hitch: it was going to wear a Scion badge, but parent Toyota decided to pull the plug on its struggling youth brand.

So, the crossover is back in Europe yet again. But this time, it’s badged the Toyota C-HR, and that’s what buyers on both sides of the big ditch will finally be seeing when it makes its way into showrooms later this year.

(Sports cars, SUVs, hybrids and ragtops. Click Here to check out all the news from the 2016 Geneva Motor Show.)

If you liked it in an earlier incarnation, the good news is that the crossover-utility vehicle on display at the 2016 Geneva Motor Show hasn’t changed all that much. It’s got a few less angles and folds, but it still boasts a much more edgy look than you’d traditionally expect from Toyota. Give credit to the push by CEO Akio Toyoda to put more “passion” into the brand. 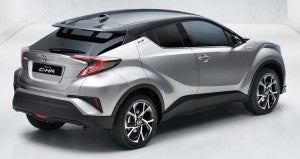 No plain vanilla with this new Toyota.

The result is almost “Transformer” like, with a slit of an upper grille and wraparound headlamps framing the familiar Toyota logo. Bulging front wheel arches flow into a crease stretching the length of the CUV. The roof has a coupe-like curve and the upper portion of the C-pillar is blacked out, making it appear like that roof is floating above the body.

From the rear, the roof extends into a wind-cheating spoiler, while the boomerang taillights jab into the curved tailgate.

While the new Toyota C-HR is a five-door, you might not realize that initially. The tight sheet metal gaps and the unusual placement of the rear door handles might you think, at first, that this is a three-door.

(Click Here to check out the new Hyundai Ioniq, which will come in hybrid, plug-in and EV versions.)

The Toyota C-HR is set to go on sale later this year. It will go up against the likes of the Honda HR-V, Nissan Juke and Mazda CX-3 – as well as the Volkswagen T-Cross Breeze also making its debut in Geneva. They’re all grabbing for market share in one of the global auto industry’s fastest-growing segment.

Measuring 171.3 inches in length, with a wheelbase of 103.9 inches, a width of 70.7 inches and a height of 61 inches, the Toyota C-HR is longer, wider and lower than the Honda HR-V; while it’s longer and wider, but also taller, than the latest Mazda CX-3.

Toyota plans to offer three different powertrains for the C-HR, including a Prius-derived hybrid.

Toyota is promising three powertrains will be available for the C-HR, including what appears to be a hybrid system shared with the fourth-generation Prius. It pairs a 1.8-liter gas engine with an electric motor to produce a combined peak 121 horsepower.

Toyota also plans to offer a 2.0-liter inline-four making 145 hp through a CVT, and a turbocharged 1.2-liter four that turns out around 113 hp. The latter can be paired with a six-speed manual or the CVT, and is available in either two- or all-wheel-drive.

As for driving dynamics, that’s another area where CEO Toyoda is trying to leave his imprint. Toyota promises the C-HR will “carry its speed through corners with excellent body control and steering fluidity.”

It will need a little bit more of a passionate feel than the traditionally numb Toyota offerings considering the young, savvy audience the maker hopes to attract with the new C-HR. Once upon a time, they were flocking to the Scion brand. But a series of misguided products led to a sharp slump in sales and that marque’s imminent demise. So, the C-HR will carry a Toyota badge and aim to carve out a new niche for the mothership.

(Click Here for a look at the Porsche 911 R, which pays homage to racers past.)