Move could raise much-needed capital in wake of diesel scandal. 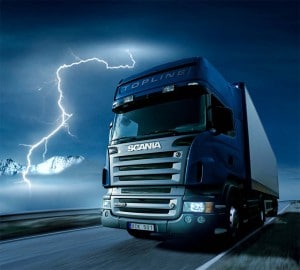 Could the dark storms of the diesel scandal force Volkswagen to sell its trucking units, Scania and MAN?

With “all options open,” Volkswagen has confirmed it is considering various opportunities for its profitable truck operations, including the possibility of a sale or IPO.

Such a move could raise much-needed capital at a time when the German automaker is trying to determine just how much it will have to pay to resolve its diesel emissions cheating scandal. The maker has already set aside more than $7 billion and lined up $20 billion more from a consortium of European banks, but some analysts warn the eventual cost could be twice that much.

“We’re keeping all options open in regards to expanding overseas, about a possible takeover as well as about a stock market listing,” a VW official said.

The Volkswagen group runs two of the world’s larger heavy-duty truck manufacturers, Scania and MAN, while also operating a commercial vehicle unit under the Volkswagen brand. The embattled automaker has been working to bring those various operations together, hiring long-time Daimler AG executive Andreas Renschler to manage the move in February 2014.

Rival Fiat spun off its own commercial vehicle operations several years ago and the now-merged Fiat Chrysler recently launched IPOs in both the U.S. and Italy for its profitable Ferrari unit.

Earlier this year, VW sources suggested the company might be willing to relinquish some assets to ensure the new line of credit would be paid back. Some sources have suggested the Ducati motorcycle subsidiary might also go up for sale, if needed.

In an interview in Munich this week, Renschler said, “We’re keeping all options open on our way to becoming a global champion. We want to be industry leaders in terms of profitability, customer-oriented innovations and global presence, not necessarily in terms of sales volume.”

A critical challenge facing VW is the North American market, where it is not a player. It would like to challenge rivals including Volvo and Daimler’s Freightliner subsidiary. Such a move, however, might require a major shift, whether through an IPO or finding a partner.

(Click Here for details about the delayed VW shareholder meeting.)

“In the long-term, the North American market is of course interesting for us, but it has to be a good fit for us as well as for a possible partner,” Renschler told Bloomberg.

While there are numerous reasons to keep and grow the truck subsidiary, there are also some opportunities to come from an IPO, several observers suggested.

“This is an interesting decision for Volkswagen as keeping hold of the truck business might help it smooth out what is a tough period on the car front following the emissions scandal,” said Christian Stadler, a professor of strategic management at the Warwick Business School.

“But from the perspective of the truck division it will probably find it hard to get any extra capital to grow because the group’s focus is on the emissions scandal, even though this is a good period to for the truck division to grow,” he added. “The truck market is going through a difficult period, so acquisitions would be cheaper.”

A decision on what to do with the truck unit may depend on VW’s supervisory board figuring out what the emissions scandal will eventually cost the carmaker. The board last week announced it was delaying the release of 2015 earnings, as well as the annual corporate stockholders’ meeting until it could come up with a reasonable figure to factor into last year’s numbers.