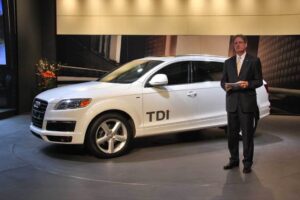 Audi has submitted a plan to US officials for fixing the diesel engines in models like the Q7.

With management still trying to get a full grip on the diesel emissions cheating scandal that has rocked the world’s second-largest automaker, Volkswagen says it will delay the release of its 2015 earnings, as well as its annual shareholders meeting.

It is also unclear when VW will now publish the results of an internal investigation into the ongoing crisis. The report was to have been released in time for the company’s annual meeting. Leaked details have hinted that the subterfuge was an “open secret,” resulting from a corporate culture in which failure to meet even the most difficult goals was not an option.

The annual shareholders meeting was scheduled for April 21, but VW said it will announce new dates for the gathering and the release of its earnings, explaining that it first must deal with “remaining open questions and the resulting valuation calculations relating to the diesel emissions issue.”

In September, the U.S. Environmental Protection Agency revealed that VW had installed a so-called “cheat device” in the engine control software used by nearly 500,000 vehicles sold in the U.S. The automaker quickly confirmed the problem affecting its 2.0-liter turbodiesel and, subsequently, a 3.0-liter diesel engine.

VW also revealed that the suspect software had been used in 11 million vehicles sold worldwide.

A number of senior managers – including former CEO Martin Winterkorn – have either resigned or been forced out. The carmaker began making repairs in many markets last month, but it has yet to win approval for a fix to handle vehicles sold in the U.S., where diesel emissions regulations are the toughest in the world.

A key issue holding up VW’s earnings report is an apparent disagreement among key members of the maker’s 20-person supervisory board over how to account for the crisis in the 2015 earnings.

how to account for the scandal. The maker has set aside more than $7 billion, and it lined up a $20 billion credit line from a consortium of European banks. Some analysts believe those numbers don’t go nearly far enough, however. VW is facing more than 400 lawsuits in the United States that have been consolidated before a federal court in San Francisco. Additional suits have been filed overseas.

Not only owners, but dealers and investors are making claims – those shareholders demanding VW recompense them for losses to their portfolios. VW shares have plunged in value since the scandal was touched off last autumn.

(Diesel cheating an “open secret” at VW…or was it? Click Here for the story.)

Though the scandal has largely centered around the Volkswagen brand itself, some of the suspect engines were used in Porsche and Audi products, as well.

VW officials have vowed to change their corporate culture to address the root causes of the diesel scandal. And the leader of the Audi brand’s labor union is warning that he will “hold management responsible” for making the necessary changes. The union is demanding a “thorough implementation” of changes, Peter Mosch told the Reuters news service.

Audi submitted a plan this week to U.S. regulators aimed at fixing the 3.0-liter diesel engine used in some of its models.