Premium SUV set to offer an array of engine options. 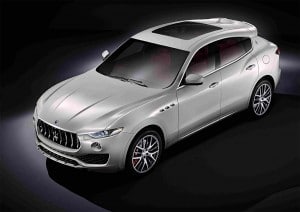 With the Geneva Motor Show launch of the new 2017 Levante next month, Maserati will become the newest entrant into the super-premium SUV market, a segment that is set to see an explosion of new product over the next several years.

Originally introduced as the Kubang concept vehicle at the 2011 Frankfurt Motor Show, the idea was to borrow from the best of the Fiat Chrysler family, lifting bits of the familiar Grand Cherokee platform and pairing it was a Ferrari-derived V-8.

“At a technical level, the Levante’s chassis is designed to combine the outstanding on-road performance typical of every Maserati with unrivalled handling even on very low-grip surfaces and an excellent off-road performance and ride,” Maserati declared in a statement accompanying these images.

While it may have American roots, the 2017 Maserati Levante clearly shows its Italian heritage with a design that borrows heavily from the Maserati form language. There’s the familiar waterfall grille with Neptune’s trident logo, the creased hoodline and the muscular shoulders, the front fenders adorned with Maserati’s trademark portholes, and the three signature front air vents. 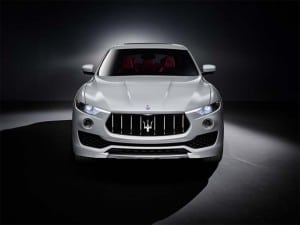 One distinctive touch picked up since the reveal of the original Kubang concept: the production Levante features distinctive split front lighting, the narrowly tapered upper lamps framing the upper grille, the foglamps riding just above the lower radiator.

(Jaguar smashes through 200 mph barrier with F-Type SVR. Click Here to check it out.)

Maserati isn’t saying much about the 2017 Levante beyond noting that it “boasts a high level of content as standard,” with all versions featuring:

Despite its size, Maserati is putting the emphasis as much on “sport” as on “utility” with the 2017 Levante – no surprise considering it will be going up against the likes of the Porsche Cayenne, the first real luxury alternative to a classic sports car or sports sedan. It’s now the best-selling model in the German maker’s portfolio. 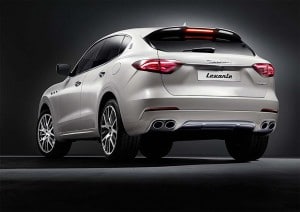 The top-line version of the 2017 Maserati Levante will features a Ferrari-made V-8.

But the field is quickly getting crowded. Bentley is getting ready to start selling its new Bentayga, and the list of other entrants includes: Aston Martin, Lamborghini and even Rolls-Royce, the latter expected to borrow heavily from the X series of “sport-activity vehicles” made by partner and parent BMW.

While the maker isn’t revealing specifics ahead of the Geneva Motor Show debut, the 2017 Maserati Levante is expected to eventually offer several powertrain options. That’s thought to include a 3.0-liter turbodiesel, a 3.0-liter gas turbo putting out 350 horsepower in one configuration, and 430 hp in a souped-up model. The top-line package will feature a 580 hp V-8 sourced from Ferrari. Look for that package to be hitting 60 in around four seconds.

The 2017 Maserati Levante is just going into production at an FCA plant near Turin. It should be in wide distribution in the U.S. by late spring.