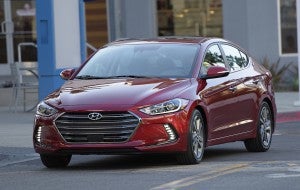 The 2017 Hyundai Elantra boasts improved handling and more technology in its latest iteration.

The buzz throughout the car business revolves around utility vehicles and trucks.

But compact cars remain one of the industry’s largest segments and Hyundai, the ambitious South Korean automaker, plans to intensify the competition with the new version of the popular Elantra with subtle and not so subtle improvements.

The automaker is ramping up the availability of safety technology on the new compact, such as automatic braking, as well as connectivity services, such as Apple CarPlay. The focus on technology both for safety and fun should worry rivals like Honda and Toyota that have long dominated the segment.

Despite some success in the past, the Elantra has been considered something of a challenger in the compact segment, which has held its own in the past three years even as sales of trucks and crossover vehicles have surged.

The latest version of the new 2017 Elantra, however, underscores the steady evolution of cars in this segment, which are now roomier, better constructed, more powerful, smarter and more fun to drive even as the pricing remains eminently affordable.

The exterior design of the new model retains its handsome profile and proportions even though the car is slightly wider and longer. The design was tweaked and refined with features such a horizontal taillights, a new rear deck lid with a functional integrated spoiler as well as the availability of HID headlights and 17-inch alloy wheels, which smartened up the appearance of the Elantra I drove.

But key changes to the 2017 version of the Elantra are underneath the sheet metal. 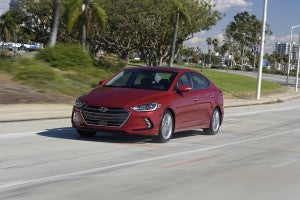 The new Elantra gets a 2.0-liter four-cylinder engine that outperforms the previous option in the car.

The 2017 Elantra’s structure is not only lighter, but also tighter and stronger. The improvements in the body structure have come from the greater use of structural adhesives. Carmakers have borrowed the structural adhesives from the aircraft industry, where they are a proven technology that can also strengthen the underlying structure of new vehicles.

Structural adhesives also help cut down on the noise and vibration, making the interior of the cabin quieter and less stressful on long drives over varied road surfaces. While the exterior and structure of the Elantra are near the top of the mark, the interior design is functional, well-equipped and surprisingly comfortable … but definitely cheap.

The results of the improved structure and an overhaul of both the rear and front suspension is quite evident while driving the Elantra both on hilly roads and even the freeway.

Unlike the previous version, which had a tendency to wallow or sway through curves, the tighter body gives the Elantra a more solid, nicely planted feel. Even over dips and bumps the car keeps its poise and at normal speed, tire squeal, a sign a car is being pushed close to the limits, is minimal. 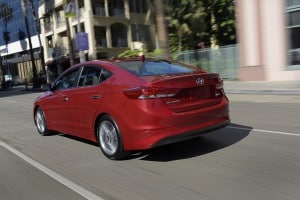 The 2017 Elantra’s structure is not only lighter, but also tighter and stronger. The improvements in the body structure come from the use of structural adhesives.

The steering, another imperfection in earlier versions, has been improved substantially. The steering on the 2017 Elantra offers more direct feedback, giving the driver more confidence the rest of vehicle will follow when the wheel is turned. The rear suspension also has been improved with a new design and new components, which are instrumental in improving the Elantra’s stability and providing the driver with greater control on the road.

Overall, the changes to the steering, suspension and body structure improve the quality of the Elantra’s ride and handling and bolster it overall driving dynamics.

The engine tested, a new 2.0-liter, four-cylinder engine from Hyundai’s own engine group, delivers ample, if not overwhelming performance during the test drive. The powertrain is equipped with Eco, Sport and Normal mode buttons so the driver can adjust the car to the setting that he wants.

The engine and six-speed automatic transmission operate quickly, efficiently and quietly with a minimum of fuss. Power came up on upon demand and so the car moved up to speed quickly in passing situations. The combined fuel economy rating is 33 miles per gallon, including 29 mpg in the city and 33 mpg on the highway, which isn’t exactly the best in the segment but given Hyundai’s trouble with the EPA a couple of years back the automaker probably didn’t want to push too hard for better ratings.

But the total price for top of the model includes an impressive array of features, such as automatic braking, lane-departure warnings and blind-spot detection, which work to help keep the driver and any passenger safer. 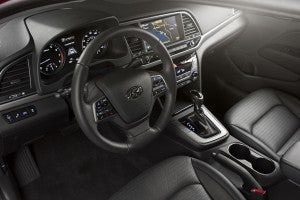 All Elantras are also equipped with IPhone, USB and auxiliary input jack as well as Apple CarPlay and Android Auto as well as XM Radio.

The list of features available on the Elantra also includes leather wrapped steering wheel and shift knob, heated front and rear seats and an upscale Infiniti sound system that makes it enjoyable to listen to music. All Elantras are also equipped with IPhone, USB and auxiliary input jack as well as Apple CarPlay and Android Auto as well as XM Radio.

(To see more about how the collector auctions in Arizona fared, Click Here.)

The 2017 Hyundai Elantra will reach showrooms with a list of features once found only on expensive sedans that cost twice as much. The driving dynamics also have been greatly improved and should impress anyone looking for a competent affordable car that’s can be driven to work and back without embarrassment an also offer a measure of luxury and refinement that once seemed impossible to find in old-school econo-boxes.