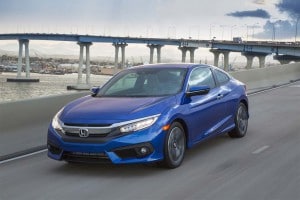 A few generations back, the Honda Civic Coupe was the car of choice for the tuner crowd. And for good reason, the Civic Coupe was attractive, affordable and easy to modify.

The last two generations didn’t quite click, however, and for a variety of reasons, not the least of which was a seeming drought at the Honda design studios, the last couple of Civic Coupes clearly falling into the boring category.

Now comes an all-new version and if the decidedly unscientific study we conducted during a couple days of driving offer any indication, the 2016 Honda Civic Coupe clearly serves up the eye candy. But how does it do on the road? And is the Coupe Honda needs to win back those hot young buyers it’s struggled to win back in recent years?

Visually, the new Honda Civic Coupe delivers no real surprises. It’s only changed modestly since Honda unveiled a thinly disguised concept version at the New York Auto Show last spring. And the face is virtually indistinguishable from the Civic Sedan that went on sale last year. 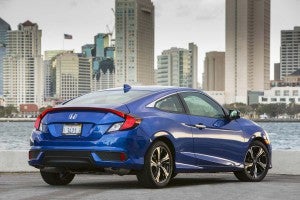 Compared to the sedan, the Civic Coupe is 5.4 inches shorter, at 176.9 inches, though they share the same wheelbase. The coupe also a bit lower – 0.8 inches by the back window. And it features a more dramatic roofline, unique sheet metal back of the A-pillar, and back glass than the Civic Sedan, with the roof tapering into more aggressively flared rear fenders and wheel wells.

One of the more distinctive features, from a rear viewpoint, is the new LED lighting package that wraps across the entire trunk lid.

There are two fewer doors and about three less cubic feet of cargo space, and most of that shorter body translates into a more 2+2 interior than the compact sedan offers. But styling, rather than practicality, is what sells a coupe, and the design of the new Civic two-door will almost certainly be drawing one-time loyalists and others in for a closer look. 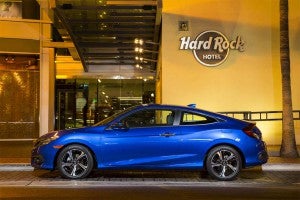 The 2016 Honda Civic Coupe is about 5 inches shorter than the current sedan.

In developing the new Civic family, Honda’s product team took a class-above approach. They benchmarked not only such competitors as the Toyota Corolla but higher-end imports such as the Audi A3. We got our first sense of that that means when we drove the 2016 Honda Civic Sedan last year. In terms of features, fit-and-finish and interior refinement, Honda has clearly aimed high.

The cabin itself is stylishly attractive, not your typical compact wasteland covered in cut-rate plastic panels and painfully fake “wood” trim. Even the base Civic Coupe is well appointed, with two-tone seats adding a little panache to the interior.

As with the Civic sedan, Honda has gone with a touchscreen display that seems precisely aimed at tech-savvy young buyers. But it has a number of weaknesses, the most significant being the lack of either volume or tuning knobs. We also found the system seemed, at times, to struggle with even simple voice navigation commands. 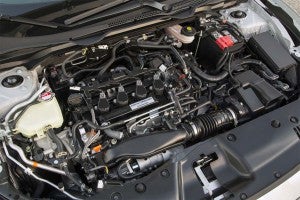 Like the sedan, 2016 Honda Civic buyers have a choice of two different engines, including the base 1.8-liter, naturally aspirated inline-four. It’s a reasonable engine option, though not especially peppy at 158 horsepower and 138 pound-feet of torque. It deliver 30 mpg City, 41 Highway and, according to the EPA, 34 Combined.

You’ll get slightly better mileage – and a big boost in the fun-to-drive column – with Honda’s new 1.5T. The first turbo in a mainstream Civic, it bumps output to 174 hp and 162 lb-ft, even though it manages an extra 1 mpg in the City and Combined cycles, at 31/41/35.

If the turbo is more your speed, you have one other factor to consider. Initially, Honda will offer the 1.5T package with its familiar CVT gearbox. But, if you wish, you can order the fifth-generation Civic sedan with a new six-speed stick. From what we could tell without a fell series of off-the-line tests, the manual seems but a hair faster than the CVT – but it is decidedly more fun to drive. 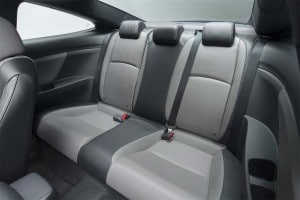 The new Coupe's backseat is tight.

According to Honda, the Civic Coupe gets the same multi-link rear suspension as the Sedan, though it’s a bit more stiffly tuned. In reality, it was hard to tell much of a difference – not that this is a bad thing. The 2017 Civic Sedan revealed a new, more dynamic ride that really does move into Audi territory. And that carries over to the Coupe. One plus is that the shorter car seems to turn in just a wee bit quicker than the four-door Civic.

The overall ride is a wee bit stiffer. That said, we didn’t feel harsh jolts, even when we discovered the relatively few potholes to be found in and around San Diego, site of our first Civic Coupe drive.  One thing missing: even the slightest sense of torque steer, even under the hardest launches. And with the 1.5-liter engine, you’d have to look hard to find any turbo lag, either.

For the 2016 Civic, Honda is adding an assortment of new safety features, most lumped under the “Honda Sensing” package. These include Blind Spot Sensing, as well as both Active Cruise Control and emergency auto braking. The cruise system will also follow heavy traffic down to a complete stop. Honda expects to earn both a 5-star NHTSA rating and a Top Safety Pick+ endorsement from the IIHS. 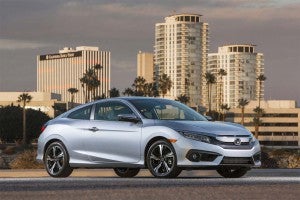 While pricing hasn’t yet been released, word is that the new model will be comparable to the outgoing Honda Civic Coupe. That would suggest a starting price somewhere in the $20,000 to $20,500 MSRP range. Of course, you’ll be able to push that up into the $30,000 range when fully loaded.

(It isn’t easy being green. Just ask Honda about its soy-based wiring. Click Here for the story.)