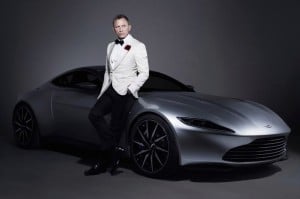 One of the two Aston Martin DB10s used in the filming of the James Bond movie, "Spectre," and signed by Daniel Craig, sold for $3.48 million at a charity auction.

A fan of James Bond or Aston Martin must have shaken, not stirred, their couch cushions to dig out all of their extra money, pennies even, to buy one of the DB10s in the new Bond adventure “Spectre.”

The new Aston was one of 10 used in the filming of the latest installment of everyone’s favorite British spy and raised $3.48 million at a charity auction in London.

Bidding was spirited for the car, which was one of just two unmodified vehicles, used in the filming, and as an added bonus: it was signed by the current Bond: Daniel Craig.

In addition to getting perhaps one of the most impressive pieces of movie memorabilia ever, the owner is getting a chunk of automotive history as it is the only DB10 offered up for public sale.

“The DB10 is one of the rarest cars ever created,” said Aston Martin CEO Andy Palmer. “Only 10 will ever be made and this is the only one that will be made available for sale.”

If nothing else, it’s a bad machine featuring a carbon-fiber body with a 4.7-liter V8 and six-speed manual borrowed from a V8 Vantage.

Production of the DB10 was strictly limited to 10 models of the bespoke sports car, which was developed and hand-built by the designers, engineers and artisan craftspeople at Aston Martin’s Gaydon headquarters in the UK.

(Click Here to find out what American drivers spend an average of $300 on to fix.)

Aston’s have been the vehicle of choice for the superspy for most of the movies, although BMW crept in for a few years when Pierce Brosnan took his turn at Bond, and Bond has commandeered other vehicles in a pinch, including an AMC Hornet Xthat he famously completed a corkscrew jump in during “The Man With The Golden Gun.”

Eight of the DB10’s were modified for filming, but two of those produced were kept back as show cars for display purposes only and the DB10 auctioned is one of them.

The money raised benefitted Doctors Without Borders, which provides medical care and support to victims of armed conflict, epidemics and other disasters.