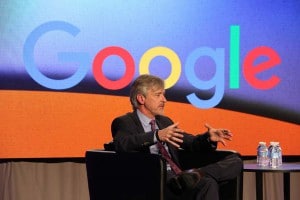 Google is going the full Monty. While some other research programs are looking to phase in autonomous vehicle technology, a step at a time, The head of the Silicon Valley’s self-driving project says his company doesn’t believe in taking baby steps.

In a visit to Detroit coinciding with the annual North American International Auto Show, Google’s John Krafcik said that as the company’s autonomous vehicle project moves ahead, Google will be “partnering more and more and more.” But Krafcik pointedly avoided answering the obvious question: what about Ford?

Numerous reports over the last month have suggested Google and Ford are ready to team up to put the Silicon Valley firm’s technology on the road. The move, insiders claim, would help the Detroit automaker kick-start an autonomous vehicle program that has lagged behind key rivals’ efforts.

“We understand no one goes this alone,” said Krafcik, a former CEO of Hyundai Motor America and, in an early incarnation, a senior engineer at Ford. “In the next stage of our project, we’ll be partnering more and more and more. We have to figure out the right set of partnerships to unlock.”

Google has been working on autonomous vehicle technology for the better part of the last decade and Krafcik, who came onboard last year, said progress is coming rather rapidly. 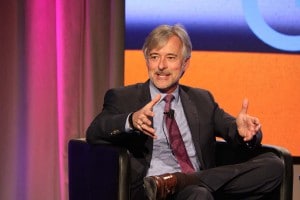 “We’re pretty confident our cars can handle pretty much every usual and unusual thing we can encounter,” he said, showing off a video of one of the more unusual situations: a woman in an electric wheelchair chasing a duck down a street.

That said, Google’s autonomous prototypes have been involved in a reported 16 accidents. Legally, the other driver was at fault in all those incidents. But Google officials have said they need to program their cars to better anticipate what human drivers do – among other things, trying to dash through a yellow light to save time.

(Getting to full autonomy will be difficult, cautions new Toyota research chief. Click Here to learn why.)

Google last year began launching a fleet of specially designed “Google Cars” built by Detroit’s Roush Automotive. They’re being run near the tech firm’s Silicon Valley campus and another facility in Texas. Krafcik said the company hopes to begin testing them in other places to broaden its experience. It needs to fine tune its software to handle other roads and weather conditions.

But it could be running into a bit of a roadblock in terms of reaching its ultimate goal: vehicles that can operate without anyone behind the wheel. Indeed, Google had hoped that later versions of its self-driving prototypes would operate with no steering wheel or pedals, just an emergency shutoff button. But draft rules recently released by the State of California would not permit that, requiring a specially licensed operator always be in a car equipped with normal controls.

Google has been looking for partners interested in using its autonomous technology.

That rule eventually could be revised, many observers believe. Meanwhile, U.S. Transportation Secretary Anthony Fox will make an appearance at the Detroit Auto Show on Thursday to announce new measures the government will take to reduce existing obstacles and encourage the development of autonomous vehicles.

Virtually every major global automaker now has an autonomous research program underway. Toyota, which was long skeptical of the technology, recently announced a $1 billion program. Ford last week said it was tripling the size of its autonomous test fleet this year.

Proponents, including the National Highway Traffic Safety Administration’s chief Mark Rosekind, believe the technology could lead to a massive reduction in highway deaths, perhaps down to zero. But Krafcik said Google thinks the technology could also improve mobility for those elderly and disabled who cannot drive at all.

That’s one of several reasons, he stressed, why Google does not believe in phasing in self-driving technology, but believes only fully autonomous cars are acceptable. “The car has to shoulder the whole burden.

The company has sent mixed signals about how it plans to put its technology onto the road. Krafcik’s second-in-command, Chris Urmson, has suggested the maker doesn’t want to build its own cars and would prefer finding a partner. Whether that means licensing Google technology, buying cars from an established, maker or even using a small contractor like Roush, Krafcik wasn’t ready to say. The project is still a good distance from commercialization, he stressed.

That said, it is moving forward rapidly. And that means, “We hope to work with many of you guys,” Krafcik said, during a speech to a group of industry leaders.

Would that include Ford? The normally voluble Krafcik wasn’t even willing to say “no comment” as he scurried off the stage and off to a meeting, leaving a passel of reporters in the lurch.

For his part, Ford CEO Mark Fields wasn’t much more helpful, earlier this week, only hinting that Ford is also looking for partners for its autonomous program. More, he hinted, will come in the not-too-distant future.