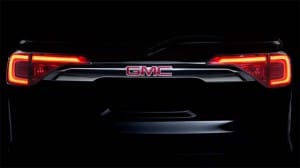 GMC teases the major makeover of the Acadia SUV it has coming for 2017.

With the first media preview at the North American International Auto Show just days away, automakers are releasing an array of teaser images to get everyone excited about what’s to come. That includes GMC which has sent us this close-up of the back end of the 2017 Acadia.

It can’t come soon enough for General Motors’ truck division. Along with sibling utes, the Buick Enclave and Chevrolet Traverse, the GMC Acadia has gone without a significant update for a decade, an unexpectedly long time in an industry where change is coming at an ever-faster pace.

For 2017, the GMC Acadia will migrate to an all-new platform that will be smaller than the one now in use – and which will be shared with a new Chevrolet model to slot above the current Equinox line.

Despite its age, the Acadia remains GMC’s third most popular model line, behind the Sierra pickup and smaller Terrain crossover. But with increasingly tough competition from models like the recently redesigned Honda Pilot, GMC desperately needs some new sheet metal.

The current GMC Acadia was based off the old GM Lambda platform which was shared with the Buick Enclave and Chevrolet Traverse, as well as the now-gone Saturn Outlook. Going forward, the 2017 Acadia will move to the C1XX platform, known internally as “Chi.” It will be several inches shorter than the current truck and, in keeping with the general trend at General Motors, the new Acadia is expected to shed some mass, perhaps several 100 pounds worth. 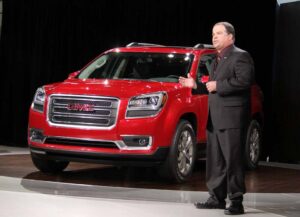 The Acadia got a modest 2013 refresh but hasn’t otherwise changed much since 2006.

It will, however, gain plenty of new technology, including a more modern Intellilink infotainment system that, among other things, gets a nicer touchscreen and such features as Apple CarPlay and Android Auto.

From an interior perspective, look for a more modern layout, with the IP anchored by a tall, new center stack. There’ll be fewer buttons, with new functions handled on the touchscreen. Despite the ute’s smaller footprint, it will retain its three-row cabin layout.

The exterior design isn’t expected to be much more than an evolutionary reskin, the teaser image suggesting a cleaner rear look with new LED taillights.

Word has it, the new 2017 GMC Acadia could be offered with an optional 2.0-liter turbocharged four-cylinder engine, but it’s also likely to get its own version of the direct-injected 3.6-liter V-6 used by Cadillac. Horsepower could surge to 300 or more. The current Acadia makes 281, with the more elite Acadia Denali coming in at 288 hp.

The transmission of choice will be GM’s new 8-speed automatic, with a 6-speed possible on base packages.

Meanwhile, there should be both two and all-wheel-drive versions offered buyers of the 2017 GMC Acadia.

Of course, expect that GMC will quickly roll out Denali version of the truck, likely pushing the price tag from a base of just over $30,000 to somewhere north of $50,000. Denali models now account for a quarter of overall GMC sales. Buyers like all the added features and more lavish cabin; GMC accountants love the higher profit margins.

(Chinese-made Buick Envision could generate some controversy. Click Here to learn why.)