Truck makers keep wondering how high is up for upscale buyers. 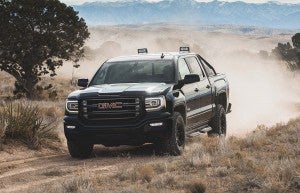 First shown as a 2011 concept, the GMC Sierra All Terrain was designed to show that serious off-road-ready pickups didn’t have to be stripped to the bone.

The production version, which debuted in mid-2015, stayed true to form, offering such niceties as leather-trimmed seats with accent stitching, an onboard WiFi hotspot and, of course, standard four-wheel-drive.

Apparently that wasn’t enough for some potential buyers in a truck market that has absolutely caught fire, and General Motors’ truck brand is coming back with an even more premium version, the GMC Sierra All Terrain X, making its debut at the Houston Auto Show today. 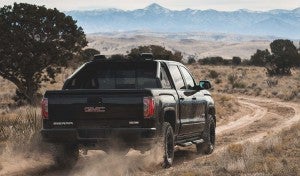 Styling is the biggest influence on Sierra customers and the new Sierra All Terrain X builds on that, officials said.

Among the functional upgrades, the All Terrain X gets:

There’s also Rear Park Assist and a unique grille and bumpers, all finished in body-color.

“Styling is the biggest influence on Sierra customers and the new Sierra All Terrain X builds on that with a more aggressive, personalized appearance that complements its exceptional capability,” said Duncan Aldred, vice president of GMC Sales and Marketing. 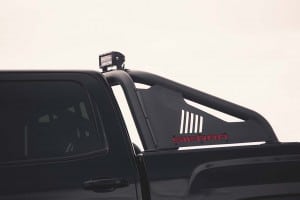 The Sierra All Terrain X sees power bumped to 365 horsepower thanks to a new sports exhaust system.

Under the hood, the Sierra All Terrain X sees power bumped to 365 horsepower thanks to a new sports exhaust system that also gives the truck a more dramatic growl.

(Click Here for details about GM’s plans to add an array of utility vehicles.)

The All Terrain X will ride into U.S. GMC showrooms in spring. The maker isn’t yet offering price, performance or fuel-economy numbers.

But Aldred notes it is just the latest in GMC’s expanding line-up of upscale trucks, along with products like the Sierra Denali and Sierra Elevation. GMC’s Denali brand-within-a-brand now accounts for more than 40% of its total sales.

If anything, truck makers are struggling to keep up with the increasingly upscale tastes of U.S. buyers who may be taking some of their recent savings on fuel and plowing them back into the products they buy.

(To see more about TheDetroitBureau’s first drive in the Cadillac CT6, Click Here.)