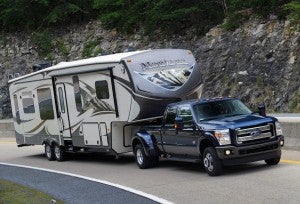 Ford has announced plans to beef up production of the new 2017 Ford F-Series Super Duty truck at its Ohio Assembly Plant in Loraine, Ohio, which has served as a talking point for GOP Presidential candidate Donald Trump’s critique of American trade policy.

“Super Duty chassis cabs are the number one trusted choice of tradespeople and fleet customers, from utility companies to construction firms,” said Kevin Koswick, director, Ford North American Fleet, Lease and Remarketing Operations. “The all-new Super Duty will help these customers keep the lights on, deliver supplies and build a better world for their customers.”

Ford’s heavy truck sales were up 4.7% in 2015 while the F-Series line-up posted a smaller gain of 3.5%, according to the company. The Ohio plant produces the new Ford F-650 and F-750, Ford E-Series cutaway vans and stripped chassis.

The plant, which opened in 1974, was at the center of some political controversy last year when presidential candidate Donald Trump claimed Ford reversed course and decided to build commercial trucks in Ohio after hearing the GOP candidate attack the company’s plans to invest $2.5 billion in Mexico.

Trump said he would penalize the company for moving production Mexico without providing specifics. Ford answered Trump’s critique by saying the plan to build the medium duty F-650 and F-750 truck in Ohio had been in the works for more than four years.

“Ford has not spoken with Mr. Trump, nor have we made any changes to our plans,” the company said in a press release. “We decided to move the F-650 and F-750 medium-duty trucks to Ohio Assembly in 2011, long before any candidates announced their intention to run for U.S. president. We are proud that Ford has invested $10.2 billion in our U.S. plants since 2011 and hired nearly 25,000 U.S.” Ford noted in a statement last fall.

Ford’s statement and attempt to clarify the record have not stopped Trump from using the flap as example of the need to alter U.S. trade policy. The United Auto Workers also has taken credit for pressuring Ford during last year’s contract negotiations to build more vehicles at plants such as Ohio Assembly.

The result is up to 350 pounds of weight savings with additional weight savings reinvested everywhere it counts, giving customers more towing and hauling capability than ever before. Components such as axles, hubs and brakes are also larger and stronger to support work demands.

The all-new, high-strength steel frame is engineered with an open-C-channel design behind the cab to enable easy aftermarket body upfit and modification. The all-new frame is made of more than 95% high-strength steel and fully boxed from the front to the back of the cab, and an open C-channel extends all the way behind the cab to accommodate aftermarket body builders.

Fleet operators and commercial upfitters will find it easier to connect electrical equipment to the truck. An all-new smart Controller Area Network interface allows up¬fitters to more easily integrate upgrades to meet their customers’ needs, with six auxiliary upfitter switches available to operate a variety of powered options, such as lights, compressors or other power equipment, Kenwick said.