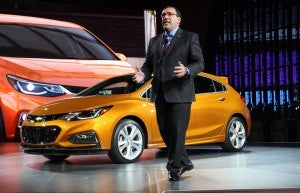 GM's Alan Batey introduces the 2017 Chevy Bolt to the media at the North American International Auto Show in Detroit.

A week after showing off the new Chevrolet Volt battery-electric vehicle at the 2016 Consumer Electronics Show, General Motors rolled it back onto the stage at the Detroit Auto Show, this time revealing some of the details of its electric drive system.

Set to reach showrooms later this year, the Chevy Bolt will be the first long-range electric vehicle targeted at a mainstream market, arriving about two years head of the planned Tesla Model 3. GM officials say it will deliver about 200 miles per charge and should come in at about $30,000 after factoring in federal tax credits.

But how it will get there was something that the maker neglected to reveal at the CES gathering in Las Vegas, waiting instead for its news conference at the North American International Auto Show. 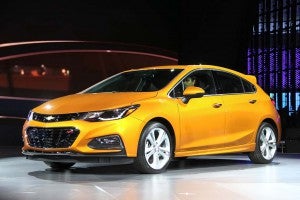 The new 2017 Chevy Bolt will do zero-to-60 mph in less than seven seconds, according to executives.

The 2017 Bolt will add another feature that GM hopes will gain it traction in a market that hasn’t exactly embraced electric vehicles: performance. While it’s not a Tesla Model S with “Ludicrous Mode,” the Bolt will launch from zero to 60 in less than seven seconds, noted Mark Reuss, GM’s global director of product development.

“The Bolt EV performs more like a sports sedan than a crossover,” he said during a news conference at Detroit’s Cobo Hall.

Bolt uses GM’s first “architecture” designed specifically for electric propulsion since the maker introduced its pioneering EV1 more than two decades ago. The platform is almost like a skateboard, with the 288 4-inch by 13-inch lithium-ion cells mounted underneath the passenger compartment. The layout both improves Bolt’s center of gravity and permitted GM designers to come up with a B-segment vehicle with D-segment interior space. 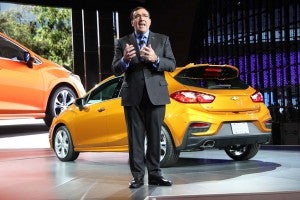 The new Bolt's battery configuration allows Chevy to make the crossover EV roomier than it looks.

All told, the Chevrolet Bolt uses 60 kilowatt-hours of lithium-ion batteries. At the beginning of the decade, that might have cost GM as much as $50,000 to $60,000, or nearly $1,000 a kilowatt-hour. During his speech, product czar Reuss noted GM and its battery partner, Korea’s LG Chem, have driven the cost down to about $145 a kWh. That adds up to a savings of more than $40,000 per vehicle – savings that are passed onto consumers.

(Click Here for impressions of an early test drive of the new Bolt.)

The new batteries are designed to produce less heat than earlier chemistry, and also to charge more quickly. Using a Level II, 240-volt charger, the Bolt will have a 100% charge in nine hours. With a high-speed Level III 440-volt DC charger, it will get enough juice to go 90 miles in just 30 minutes.

That’s still quite a bit slower than filling up at a local gas stations, but industry experts find most EV owners still tend to charge up at home overnight. As battery-cars go more mainstream, however, the ability to charge quickly and travel further will be a critical selling point, according to Pam Fletcher, the head of the Bolt program. 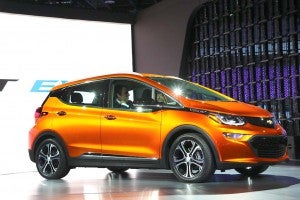 The new Chevy Bolt is expected to travel up to 200 miles on a full charge.

“Interest rises significantly once a vehicle offers range of at least 150 miles,” she told TheDetroitBureau.com.

Or so GM has to hope. Sales of plug-based vehicles actually dipped in 2015, most analysts blaming the sharp dip in fuel prices last year.

(To see more about the Civic and XC90 taking Car and Truck of the Year honors, Click Here.)

GM officials are more upbeat – but they need to be. Vehicles like Bolt, as well as the plug-in Chevy Volt, will be critical for automakers to meet the stiff new emissions and mileage standards that will be phased in over the coming decade.