Buick Envisions Huge Success in US with Chinese Crossover 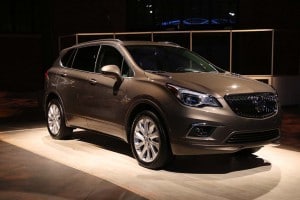 The new Buick Envision is coming to the U.S. after having explosive success in the Chinese market.

The Envision will fit neatly into the Buick line-up in the United States, General Motors executives said as they unveiled the first vehicle built by GM’s extensive operations in China for sale to American consumers during a sneak preview ahead of the official press days for the North American International Auto Show.

Duncan Aldred, Buick vice president, noted the Buick brand has set sales records in each of the last three years and the introduction of the Envision will help insure that the momentum continues in the coming months. Demand from dealers is already very strong, he said.

For one thing, the Envision is a truly international vehicle that GM expects to complement the Enclave and the Encore, the other two crossovers in the Buick portfolio that account for roughly 60% of the brand’s sales in the U.S.

It will feature the latest technology and luxury in a package that is not as large as the Enclave, but larger than the Encore, Aldred said. It expands the brand’s collection with solid driving dynamics, advanced technology, connectivity and Buick’s quiet interior acoustics. 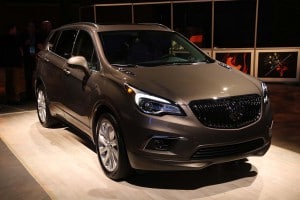 The Envision will be GM's first car imported into the U.S. from China.

The Envision has been a smash hit in China, selling well beyond what Buick officials expected. They expected it would hit the 90,000-unit mark in its debut year, but it blew past that, selling about 140,000 units. This year, Buick expects to sell about 200,000 Envisions under its revised estimates.

The success in China, as well as the current popularity of CUVs in the U.S., gives the brand reason for optimism for U.S sales. Alex Gutierrez, senior analyst for Kelley Blue Book, noted the shift to crossover is expected to continue for the foreseeable future.

It is a global vehicle, designed from the ground up as a Buick luxury compact crossover and reinforces Buick’s position as a global brand with a strong presence in the world’s two largest car markets.

(Click Here for more about GM’s plans to add an array of utility vehicles.)

“The all-new Buick Envision is a modern, confident and responsive luxury compact crossover that combines the brand’s core characteristics with performance features never seen on a crossover,” Aldred added.

“That dynamic experience behind the wheel is complemented by Buick’s signature luxury, whisper-quiet cabin and connectivity features that make it a crossover that customers are going to love as drivers and passengers.”

Aldred added while the Envision is built in China where it was awarded Motor Trend’s SUV of the Year in China. It was designed, engineered and tested in Michigan as a world-class luxury crossover to challenge the world’s best competition.

The Envision will come to market with a 252-horsepower turbo charged engine with stop/start technology, matched with Buick’s first crossover vehicle application of HiPer Strut front suspension and Buick’s first Active Twin Clutch all-wheel-drive system. It is also equipped with fuel-saving features including upper grille shutters that open and close to enhance aerodynamics on the highway.